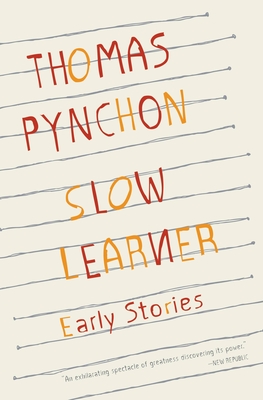 Early short stories by Thomas Pynchon, introduced by the author and praised as "an exhilarating spectacle of greatness discovering its powers" by the New Republic.
Thomas Pynchon's literary career was launched not with the release of his widely acclaimed first novel, V., but with the publication in literary magazines of the five stories collected here. In his introduction to Slow Learner, the author reviews his early work with disarming candor and recalls the American cultural landscape of the early post-Beat era in which the stories were written. Time magazine described this introductory essay as "Pynchon's first public gesture toward autobiography."
"Funny and wise enough to charm the gravity from a rainbow...All five of the pieces have unusual narrative vigor and inventiveness." --New York Times

Thomas Pynchon is also the author of the novels V., The Crying of Lot 49, Gravity's Rainbow, Vineland, Mason & Dixon, Against the Day, Inherent Vice, and Bleeding Edge.

"The apprentice work of a major novelist makes better reading than the mature productions of a dozen minor ones...Readers who discover Pynchon's stories now will find an exhilarating spectacle of greatness discovering its powers."