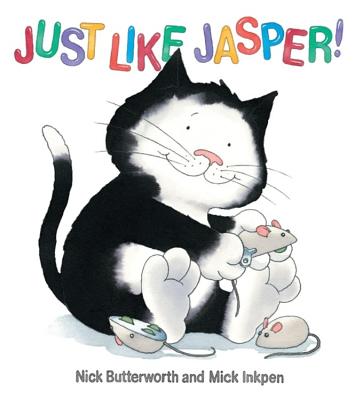 By Mick Inkpen, Nick Butterworth
This item is not available.
Out of Print

A bright, colourful picture book for very young children in which the reader helps Jasper choose how to spend his birthday money. Jasper plays with just about everything in the toyshop. But what will he eventually buy? Simple text with appealing illustrations.

Nick Butterworth (Author)
After leaving school Nick Butterworth went to work as a typographic designer and formed a partnership with Mick Inkpen. Nick's books have sold over 12 million copies around the world in more than 25 languages. He has won several prestigious awards including the Nestle Gold Award for The Whisperer. Perhaps his best known character Percy the Park Keeper first appeared in 1989 in One Snowy Night and has been the subject of a series of animated films for television.

Mick Inkpen (Illustrator)
Mick Inkpen has been a bestselling children's author for over 25 years. He is one of today's most popular picture book author/illustrators and the famous creator of both Kipper and Wibbly Pig. Mick has won the Children's Book Award for Threadbear and the British Book Award twice, for Penguin Small and Lullabyhullaballoo. Kipper won a BAFTA for Best Animated Film.

One of the most effective plot-lines of the year.—Books for Your Children