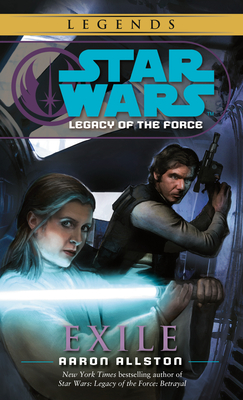 In the Stars Wars galaxy, evil is on the move as the Galactic Alliance and Jedi order battle forces seen and unseen, from rampant internal treachery to the nightmare of all-out war.

With each victory against the Corellian rebels, Jacen Solo becomes more admired, more powerful, and more certain of achieving galactic peace. But that peace may come with a price. Despite strained relationships caused by opposing sympathies in the war, Han and Leia Solo and Luke and Mara Skywalker remain united by one frightening suspicion: Someone insidious is manipulating this war, and if he or she isn’t stopped, all efforts at reconciliation may be for naught. And as sinister visions lead Luke to believe that the source of the evil is none other than Lumiya, Dark Lady of the Sith, the greatest peril revolves around Jacen himself. . . .

Aaron Allston is the New York Times bestselling author of the Star Wars: The New Jedi Order: Enemy Lines novels: Rebel Dream and Rebel Stand; novels in the popular Star Wars X-Wing series; and the Doc Sidhe novels, which combine 1930s-style hero-pulps with Celtic myth. He is also a longtime game designer and was recently inducted into the Academy of Adventure Gaming Arts & Design (AAGAD) Hall of Fame. He lives in Central Texas. Visit his website at www.AaronAllston.com.