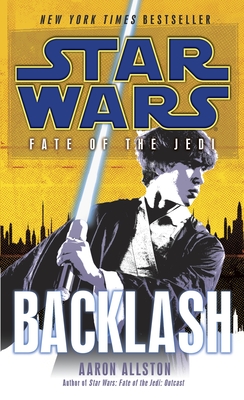 By Aaron Allston
$7.99
Usually arrives at our store within 4-7 days

Locked in a war of wills and weapons, the Jedi Order and the Galactic Alliance must come to terms—before the Sith’s army of darkness enacts revenge.

Repercussions from the dark side’s fatal seduction of Jacen Solo and the mysterious plague of madness afflicting young Jedi continue to wreak galaxywide havoc. Luke and Ben Skywalker are in pursuit of the now Masterless Sith apprentice—a chase that leads to the forbidding planet Dathomir, where the Skywalkers will be forced into combat for their quarry and their lives. Meanwhile, Han and Leia have completed their own desperate mission, shuttling madness-stricken Jedi to safe haven beyond the grasp of Galactic Alliance Chief of State Natasi Daala. Yet no greater threat exists than Abeloth, a being of ravenous dark-side energy who calls out to Jedi and Sith alike. For some it may be the ultimate source of answers for survival. For others it could be the ultimate weapon of conquest. But for all, it is a game-changing encounter of untold magnitude with unimaginable consequences.

Aaron Allston is the New York Times bestselling author of Star Wars: Fate of the Jedi: Outcast; the Star Wars: Legacy of the Force novels Betrayal, Exile, and Fury; the Star Wars: The New Jedi Order: Enemy Lines adventures Rebel Dream and Rebel Stand; novels in the popular Star Wars X-Wing series; and the Doc Sidhe novels, which combine 1930s-style hero-pulps with Celtic myth. He is also a longtime game designer and in 2006 was inducted into the Academy of Adventure Gaming Arts & Design (AAGAD) Hall of Fame. He lives in Central Texas.