An Officer and a Spy: A Spy Thriller (Paperback) 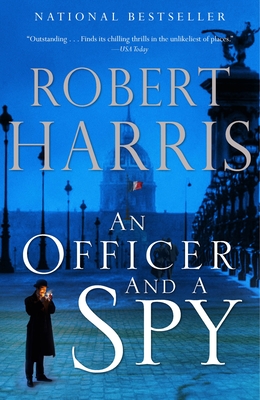 Alfred Dreyfus has been convicted of treason, sentenced to life imprisonment on a far-off island, and publicly stripped of his rank. Among the witnesses to his humiliation is Georges Picquart, an ambitious military officer who believes in Dreyfus's guilt as staunchly as any member of the public. But when he is promoted to head of the French counter-espionage agency, Picquart finds evidence that a spy still remains at large in the military—indicating that Dreyfus is innocent. As evidence of the most malignant deceit mounts and spirals inexorably toward the uppermost levels of government, Picquart is compelled to question not only the case against Dreyfus but also his most deeply held beliefs about his country, and about himself.

Robert Harris is the author of eight bestselling novels: Fatherland, Enigma, Archangel, Pompeii, Imperium, The Ghost Writer, Conspirata, and The Fear Index. Several of his books have been adapted to film, most recently The Ghost Writer. Harris’s work has been translated into thirty-seven languages. He lives in the village of Kintbury, West Berkshire, with his wife, Gill Hornby.

“Outstanding . . . Finds its chilling thrills in the unlikeliest of places.” —USA Today

“Harris has, with this novel, taken [Le Carré’s] place as the master of making documents and scraps of paper, the details of painstaking intelligence work, into drama. ” —The Daily Beast

“[Harris] outdoes himself. The period details are pitch-perfect . . . and the action pulses with intensity.” —The Miami Herald

“Mesmerizing. . . . The Dreyfus affair remains astonishing, and this exceptional piece of popular fiction does it justice.”
—The Washington Post

“A crisp, fast-paced drama. . . . From one of the great scandals of the late 19th century, Harris has written a novel which is true to the facts, scrupulously so, but reads like a combination of Le Carré at his best and Conan Doyle writing about Sherlock Holmes.”
—The Daily Beast

“Robert Harris’s novel speaks to our times in its examination of the potential dangers of military intelligence.”
—Pittsburgh Post-Gazette

“A compelling narrative of state corruption. . . . While finely attuned to modern resonances of surveillance, cultural identity and patriotic loyalty, Harris stays true to the atmosphere and morals of the period.”
—The Guardian (UK)

“A master storyteller at the top of his game. . . . The echoes of our own time are deafening. But Harris is far too smart to labor the point. He just drives his story forward, marshalling his cast of fools and knaves, soldiers and spies, dodgy handwriting experts and discreet mistresses, to superlative effect.”
—Mail on Sunday (UK)

“Claustrophobically gripping. . . . Written in elegant prose reminiscent of the 19th-century historical novel, but its form is a hybrid of the contemporary thriller, the spy novella and the courtroom drama. It is persuasive and engaging on all of these levels, while providing a unique and fresh reading of the Dreyfus affair.”
—The Irish Times

“Espionage, counterespionage, a scandalous trial, a cover-up, and a man who tries to do right make this a complex and alluring thriller.”
—Kirkus Reviews