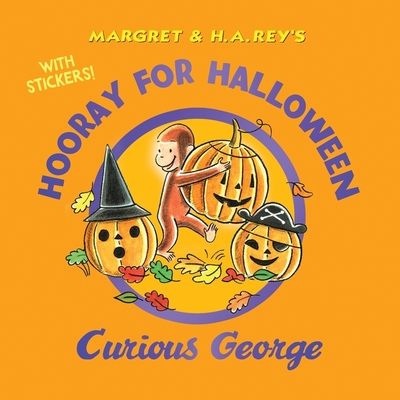 It’s Halloween! Curious George is going to a costume party and has to pick out the perfect costume. Halloween stickers add to the holiday fun.

When George and his friend the man with the yellow hat go to a party at Mrs. Gray’s house, George is excited to find out that it is a costume party. After seeing his friends dressed up as astronauts, mummies, witches, and more, George gets to pick out his own costume. But George accidentally wraps himself up in a tablecloth and gets mistaken for a ghost! Will everyone enjoy George’s Halloween trick, or will he scare away the party guests? Includes two sheets of festive Halloween stickers for more Halloween fun!

(Previously published as Curious George Goes to a Costume Party)

Hans and Margret Rey created many books during their lives together, including Curious George, one of the most treasured classics of all time, as well as other favorites like Spotty and Pretzel. But it was their rambunctious little monkey who became an instantly recognizable icon. After the Reys escaped Paris by bicycle in 1940 carrying the manuscript for the original Curious George, the book was published in America in 1941. More than 200 Curious George titles followed, with 75 million books sold worldwide. Curious George has been successfully adapted into a major motion picture and an Emmy-winning television show on PBS.