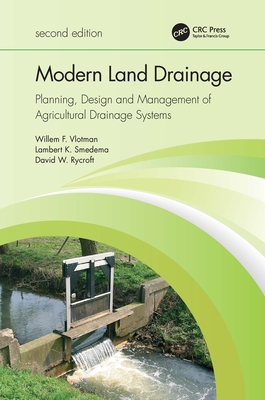 By Willem Vlotman, Lambert Smedema, David Rycroft
This item is not available.

Modern Land Drainage 2nd edition is a fully revised and updated edition of the 2004 edition. Modern Land Drainage describes traditional drainage formulas (Hooghoudt, Kirkham, Donnan, Ernst, Glover-Dumm) for rainfed agriculture in the humid temperature zone. Significant parts are devoted to drainage for salinity control of irrigated land in (semi-) arid zones, and to drainage of rice land in the humid tropics. Institutional, management and maintenance aspects are extensively covered, as well as the mitigation of adverse impacts of drainage interventions on the environment. The latest computer applications for drainage design in the context of integrated water management are described (DRAINMOD, HEC, SWAP, etc.). Field surveys are executed by governments, with the aid of consultants, but rarely are the end stakeholders (i.e., farmers and general public) involved from inception to planning to execution of a drainage system. Yet, during the Operation, Management and Maintenance (OMM) phase of a water management system, they are expected to takeover, run, bear and be responsible for the costs of OMM. The book describes successful methodologies and processes to be followed for engagement of stakeholders at all levels, from government to farm, from minister to farmer, and, from beginning to end. The book covers all aspects needed for sustainable drainage. The latest survey methodologies with satellites and drones are suggested to assess cause and effect. Waterlogging and salinity are the effect of something caused most likely upstream of the drainage problem location. Hence treating the cause may be more cost-effective. Triple Bottom Line (social, environmental and financial considerations) and the water-food-energy nexus are an integral part of the drainage design process. Controlled drainage, i.e. the balance of removal and conservation of drainage water and minimising solute transport as low as reasonably achievable (ALARA principle) is extensively described. This work is intended for use both as a university level textbook and as a professional handbook; it is of particular value to professionals engaged in drainage development in the context of integrated water resources and river basin management, civil and agricultural engineers, government officials, university students and libraries.

Willem F. Vlotman worked with Dutch and American consultants on agricultural drainage, urban drainage and irrigation projects in the Netherlands, the West Indies and Asia. In 1988, he joined the International Institute for Land Reclamation and Improvement (ILRI) and has worked for this organisation in Pakistan, Egypt and the Netherlands. In 2004 he immigrated to Australia and worked with the Murray-Darling Basin Authority until retirement in 2017. Willem Vlotman was chairman of the Working Group on Drainage of the international Commission on Irrigation and Drainage (ICID) from 1995-2013. Lambert K. Smedema worked most of his career for Euroconsult on irrigation in Africa and South America and on drainage in the Middle East and Asia. He was a lecturer/researcher at the University of Nairobi and at the Delft University of Technology. During the nineties, he worked as a consultant with the World Bank and with the Food and Agriculture Organization of the United Nations. Lambert Smedema is currently working as an independent consultant. David W. Rycroft began his professional career working for the UK Ministry of Agriculture at their Field Drainage Experimental Unit based in Cambridge. He subsequently joined consultants Sir M MacDonald and Partners and worked as a salinity control and land drainage specialist on large projects in Iraq, Somalia and Egypt. In 1979, David Rycroft joined the Institute of Irrigation Studies (Southampton University) to teach in combination with his overseas consultancy work.