Majesty and the Masses in Shakespeare and Marlowe: Western Anti-Monarchism, The Earl of Essex Challenge, and Political Stagecraft (Routledge Studies in Shakespeare) (Paperback) 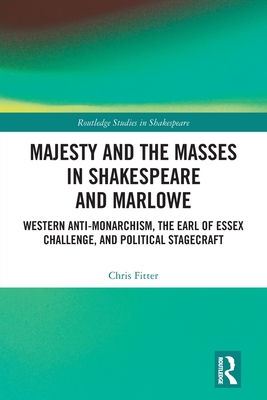 By Chris Fitter
This item is not available.

This book is a landmark study of Shakespeare's politics as revealed in his later History Plays. It offers the first ever survey of anti-monarchism in Western literature, history and philosophy, tracked from Hesiod and Homer through to contemporaries of Shakespeare such as George Buchanan and the authors of the Mirror for Magistrates, thus demonstrating that anxiety over monarchic power, and contemptuous demolitions of kingship as a disastrously irrational institution, formed an important and irremovable body of reflection in prestigious Western writing. Overturning the widespread assumption that "Elizabethans believed in divine right monarchy", it exposits the anti-monarchic critique built into Shakespeare's Histories and Marlowe's Massacre at Paris, in five chapters of close literary critical readings, paying innovative attention to performance values.

Part Two focuses Queen Elizabeth's principal challenger for national rule: the Earl of Essex, England's most popular man. It demonstrates from detailed readings that, far from being an admirer of the war-crazed, unstable, bi-polar Essex, as is regularly asserted, Shakespeare launched in Richard II and Henry IV a campaign to puncture the reputation of the great earl, exposing him as a Machiavel seeking Elizabeth's throne. Shakespeare emerges as a humane and clear-sighted critic of the follies intrinsic to dynastic monarchy: yet hostile, likewise, to the rash militarist, Essex, who would fling England into permanent war against Spain.

Founded on an unprecedented and wide-ranging study of anti-monarchist thought, this book presents a significant contribution to Shakespeare and Marlowe criticism, studies of Tudor England, and the history of ideas.

Chris Fitter was educated at Oxford, taking his doctorate from St. John's College. Professor of English at Rutgers University at Camden, his three previous books are Poetry, Space, Landscape: Toward a New Theory (Cambridge, 1994); Radical Shakespeare: Politics and Stagecraft in the Early Career (Routledge, 2012); Shakespeare and the Politics of Commoners: Digesting the New Social History (Oxford, 2017). He is author also of twenty journal essays and book chapters, and two dozen book reviews.