Flop Musicals of the Twenty-First Century: Part I: The Creatives (Paperback) 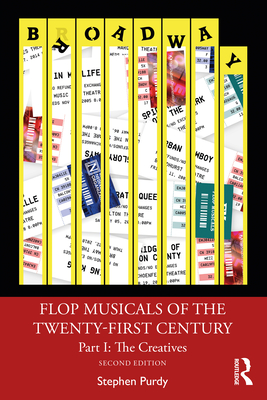 Flop Musicals of the Twenty-First Century offers a provocative and revealing historical narrative of a group of musicals that cost millions and had spectacular potential ... but bombed anyway.

Stephen Purdy examines at length the production histories, which are all bound together by a common thread. The book focuses the lens on several seemingly infallible theatre creatives who weren't destined to repeat their successes with the shows discussed in this volume. As such, Purdy grounds the discussion by examining what the legendary creators of Les Mis rables, pop superstar Elton John, wunderkind Julie Taymor, and many others have in common besides being inspired storytellers of iconic Broadway musicals. The answer is that they also all created shows that, for one reason or a dozen, didn't find an audience. Flop Musicals of the Twenty-First Century shares the story of what can happen when formidable creative teams of sell-out musicals attempt to re-create their success but miss the mark.

This is an engaging book for students, practitioners, and fans of musical theatre that contains thoughtful observations about luck and creative differences, botched adaptations, and alienated audiences, all of which can determine the fate of a musical.

Stephen Purdy is the author of Musical Theatre Song: A Comprehensive Course and is on Musical Theatre faculty at Marymount Manhattan College and Westminster Choir College. His students have performed in virtually every major Broadway musical or touring company of the last 20 years, and he regularly delivers master classes and seminars on musical theatre singing and song performance at arts institutions across the globe.