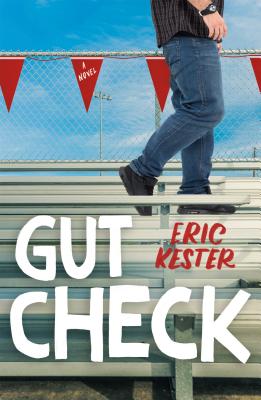 Wyatt has wanted nothing more than to play football on Grayport's championship-winning team. But not for the fame, glory, or girls. It's his last chance to build a relationship with his older brother Brett, the star quarterback, before he leaves for college. Now that their team has gained national attention, a big win could be just what the small town needs in order to rebound from a fishing season that has been devastated by Red Tide. But when Brett suffers a terrible concussion, Wyatt must decide if keeping his brother's secret is worth risking his scholarship future.

Told with irreverent humor reminiscent of Carl Hiaasen, and a stark honesty about brotherhood and masculinity for fans of Andrew Smith, Gut Check explores the struggle of grappling with uncomfortable truths.

Eric Kester's writing can be found in The New York Times, The Huffington Post, The Boston Globe, and other publications.

Eric used to work as a ball boy for the NFL and he played football at Harvard. He teaches and lives in Boston with his family. Gut Check is his debut children's novel.

"Readers don't have to like football in order to love this book . . . a brilliant debut . . . the storyline plays both offense and defense with perfection. Can the hero of a sports story be an overweight, ignored, nonathletic team mascot plucked from obscurity to land in the limelight? You bet! A winner." —Kirkus Reviews, starred review

"The protagonists, the town, and the culture of high-school football are richly developed with keen insight and pithy prose . . . Football action sequences are vivid and testosterone-fueled locker room fights (and talk) brutal, but ultimately this novel is less about football and more about people getting by in a town on the verge of collapse. And that’s where the real gut check sometimes is." —Horn Book