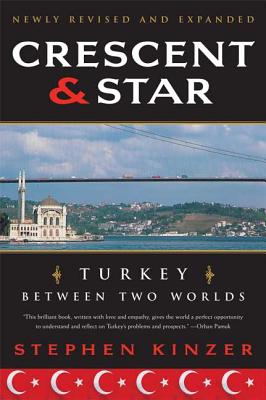 "A sharp, spirited appreciation of where Turkey stands now, and where it may head." —Carlin Romano, The Philadelphia Inquirer

In the first edition of this widely praised book, Stephen Kinzer made the convincing claim that Turkey was the country to watch -- poised between Europe and Asia, between the glories of its Ottoman past and its hopes for a democratic future, between the dominance of its army and the needs of its civilian citizens, between its secular expectations and its Muslim traditions.

In this newly revised edition of Crescent and Star, he adds much important new information on the many exciting transformations in Turkey's government and politics that have kept it in the headlines, and also shows how recent developments in both American and European policies (and not only the war in Iraq) have affected this unique and perplexing nation.

Stephen Kinzer is the author of many books, including The True Flag, The Brothers, Overthrow, and All the Shah’s Men. An award-winning foreign correspondent, he served as the New York Times bureau chief in Nicaragua, Germany, and Turkey. He is a senior fellow at the Watson Institute for International and Public Affairs at Brown University, and writes a world affairs column for the Boston Globe. He lives in Boston.

“An unusually candid account of the state of Turkish politics . . . [Kinzer] is lyrical, even romantic, about the potential of a forceful, creative and (mostly) free people to realize their own implied glorious future.” —Ira M. Lapidus, The New York Times

“Turkey matters greatly to us, given its crucial role both in Europe and in the Middle East, and this vivid book, both personal and analytical, is the best recent work on the subject.” —Richard D. Holbrooke