The Book and the Sword: A Life of Learning in the Throes of the Holocaust (Paperback) 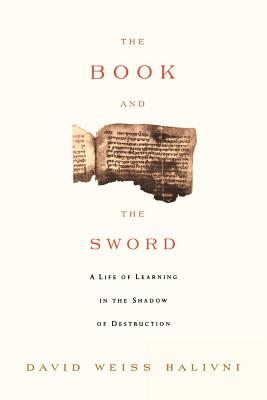 "A slim, largely cerebral, yet sometimes deeply engaging autobiography by a Holocaust survivor who has become one of the greatest talmudic scholars of the postwar era ... succinct, intellectually illuminating, and sometimes surprisingly poignant." - Kirkus Reviews

The words of the Talmud were the universe for David Weiss Halivni during his childhood in Sighet, in the Carpathian Mountains. He began his studies before he was five and he became famous for his erudition even before his ordination, at the age of fifteen, in 1943. But when the Nazis crushed the Jewish community of the Carpathians in 1944, he closed his Talmud. Halivni taught in the concentration camps and risked his life to save a scrap of paper from a sacred book. But adherence to the fundamentalist worldview that insists on reconciling every apparent contradiction in the text had become impossible for him. When he arrived in New York after the war, he began struggling toward the "window" of secular learning. From that synthesis emerged his original approach to critical study of the Talmudic text not only in its modern, printed form but as it was in its original form, the Oral Torah from the mouths of countless sages.

Painful, beautiful, and passionate, this memoir asks: What can the Holocaust mean for persons who have devoted their lives to the love of God? At the same time it is a unique look into the world of Talmudic learning, millennia old and still vibrant.