The Tablet of Destinies (Hardcover) 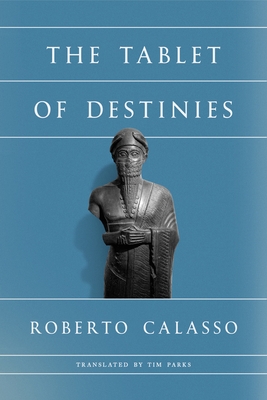 Roberto Calasso, "a literary institution of one" (The Paris Review), tells the story of the eternal life of Utnapishtim, the savior of man, in the eleventh part of his great literary project.

A long time ago, the gods grew tired of humans, who were making too much noise and disturbing their sleep, and they decided to send a Flood to destroy them. But Ea, the god of fresh underground water, didn’t agree and advised one of his favorite mortals, Utnapishtim, to build a quadrangular boat to house humans and animals. So Utnapishtim saved living creatures from the Flood.

Rather than punish Utnapishtim, Enlil, king of the gods, granted him eternal life and banished him to the island of Dilmun. Thousands of years later, Sindbad the Sailor is shipwrecked on that very same island, and the two begin a conversation about courage, loss, salvation, and sacrifice.

What Utnapishtim tells Sindbad is the subject of this book, the eleventh part of Roberto Calasso’s great opus that began in 1983 with The Ruin of Kasch. The Tablet of Destinies, a continuous narrative from beginning to end, delves into our earliest mythologies and records the origin stories of human civilization.

Roberto Calasso (1941–2021) was born in Florence and lived in Milan. Begun in 1983 with The Ruin of Kasch, his landmark series now comprises The Marriage of Cadmus and Harmony, Ka, K., Tiepolo Pink, La Folie Baudelaire, Ardor, The Celestial Hunter, The Unnamable Present, The Book of All Books, and The Tablet of Destinies. Calasso also wrote the novel The Impure Fool and eight books of essays, the first three of which have been published in English: The Art of the Publisher, The Forty-Nine Steps, Literature and the Gods, The Madness That Comes from the Nymphs, One Hundred Letters to an Unknown Reader, The Hieroglyphs of Sir Thomas Browne, The Rule of the Good Neighbor; or, How to Find an Order for Your Books, and American Allucinations. He was the publisher of Adelphi Edizioni.

Tim Parks is the author of many novels, translations, and works of nonfiction, including Out of My Head: On the Trail of Consciousness and Italian Life: A Modern Fable of Loyalty and Betrayal.

"A universe of blood, violence, and magic . . . Calasso depicts a blood-soaked universe where hundreds of gods battle for supremacy and where men prefer 'to live bound tight by destiny than abandoned to the turbulence of chance.' A vigorous rendering of the remote past." —Kirkus Reviews