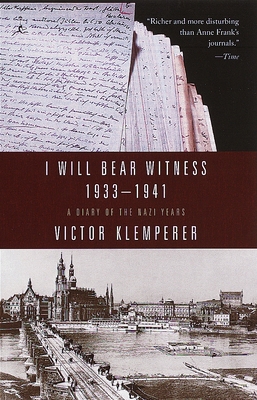 By Victor Klemperer, Martin Chalmers (Introduction by)
$20.00
Usually arrives at our store within 4-7 days

The publication of Victor Klemperer's secret diaries brings to light one of the most extraordinary documents of the Nazi period. "In its cool, lucid style and power of observation," said The New York Times, "it is the best  written, most evocative, most observant record of daily life in the Third Reich." I Will Bear Witness is a work of literature as well as a revelation of the day-by-day horror of the Nazi years.

A Dresden Jew, a veteran of World War I, a man of letters and historian of great sophistication, Klemperer recognized the danger of Hitler as early as 1933. His diaries, written in secrecy, provide a vivid account of everyday life in Hitler's Germany.

What makes this book so remarkable, aside from its literary distinction, is Klemperer's preoccupation with the thoughts and actions of ordinary Germans: Berger the greengrocer, who was given Klemperer's house ("anti-Hitlerist, but of course pleased at the good exchange"), the fishmonger, the baker, the much-visited dentist. All offer their thoughts and theories on the progress of the war: Will England hold out? Who listens to Goebbels? How much longer will it last?

This symphony of voices is ordered by the brilliant, grumbling Klemperer, struggling to complete his work on eighteenth-century France while documenting the ever- tightening Nazi grip. He loses first his professorship and then his car, his phone, his house, even his typewriter, and is forced to move into a Jews' House (the last step before the camps), put his cat to death (Jews may not own pets), and suffer countless other indignities.

Despite the danger his diaries would pose if discovered, Klemperer sees it as his duty to record events. "I continue to write," he notes in 1941 after a terrifying run-in with the police. "This is my heroics. I want to bear witness, precise witness, until the very end."   When a neighbor remarks that, in his isolation, Klemperer will not be able to cover the main events of the war, he writes: "It's not the big things that are important, but the everyday life of  tyranny, which may be forgotten. A thousand mosquito bites are worse than a blow on the head. I observe, I note, the mosquito bites."

A professor of Romance languages in Dresden, Victor Klemperer wrote several major works on seventeenth- and eighteenth-century French literature before he was expelled from his post in 1935. He lived through the war in Dresden with his wife, Eva. Klemperer's secret diaries were thought for many years to have been lost or suppressed by the Communist authorities of East Germany, where Klemperer lived after the war. He wife deposited them after his death in 1960 in the Dresden Landesarchiv, where they remained until they were uncovered by Victor Nowojski, a former pupil, who edited and transcribed them for publication in Germany. Their reception there was a national event. The diaries have been translated into twelve languages.

Martin Chalmers has translated, from the German, books by Hubert Fichte, Hans Magnus Enzensberger, and Erich Fried. He is a frequent contributor to the New Statesman and The Independent, and lives in London.

"One of the great testimonies of our century. . . . Klemperer's ability to grasp moods and attitudes has a truly Dickensian quality."   --Los Angeles Times

"What has been called one of the most remarkable documents to come out of the Second World War turns out to be one of the most compulsively readable books of the year."        --The San Diego Union Tribune

"For the next generation of historians, Klemperer's diaries will be required reading."  --Gordon Craig, The New York Review of Books

"To read his almost day-by-day account is a hypnotic experience; the whole, hard to put down, is a true murder mystery--from the perspective of the victim."--Peter Gay, The New York Times Book Review