Out of Nowhere (Paperback) 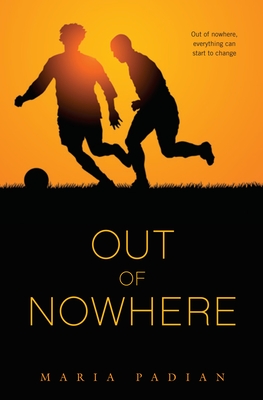 Winner of the Maine Literary Award

Called “rich and multidimensional” by School Library Journal in a starred review, Out of Nowhere follows Tom Bouchard: captain and star of the Enniston High School soccer team; boyfriend to one of the prettiest, most popular girls; and third in his class, likely to have his pick of any college (if he ever bothers filling out his applications). But life in his idyllic small Maine town quickly gets turned upside down after the events of 9/11.

Enniston has become a “secondary migration” location for Somali refugees seeking a better life after their country is destroyed by war. Tom hasn’t thought much about his Somali classmates until four of them join the soccer team, including Saeed. He comes out of nowhere on the field to make impossible shots, and suddenly the team is winning, dominating even.

But when Saeed’s eligibility is questioned and Tom screws up in a big way, he’s left to grapple with a culture he doesn’t understand and take responsibility for his actions. The refugees came out of nowhere and vanish just as quickly. And Tom may find himself going nowhere, too, if he doesn’t start trying to get somewhere.

MARIA PADIAN is the author of Jersey Tomatoes Are the Best and Brett McCarthy: Work in Progress, which was an ALA-YALSA Best Book for Young Adults. A graduate of Middlebury College and the University of Virginia, she has also attended Oxford University and the Bread Loaf Writers' Conference. Born in New York but raised in New Jersey, she now lives in Maine with her family and their Australian shepherd, and was inspired by the events in her community to write Out of Nowhere.

Starred Review, The Bulletin of the Center for Children's Books, March 2013:
“With complex national issues solidly grounded in a thoroughly credible plot, this could be an outstanding vehicle for classroom and book club discussions.”

Starred Review, School Library Journal, March 2013:
“To classify Out of Nowhere as a sports story sells it short… the novel is rich and multidimensional, addressing the Muslim experience in America, addiction, and romance.”

New York Times Book Review, February 10, 2013:
"[Padian] offers plenty of story in Out of Nowhere: romantic rivalries, class tensions, family pressures. She has a firm sense of plot, and the circumstances her characters grapple with - cyberbullying, the burden of a burnout friend, the pain of growing and changing - will resonate with young readers."

Booklist, February 15, 2013:
"Padian has written a sensitive, sympathetic, and insightful portrayal of the plight of new immigrants attempting to acculturate while being forced to deal with casual bigotry. A timely and thought-provoking examination of a continuing dynamic in American communities."

SLJ.com, March 5, 2013:
"Fast-paced descriptions of Tom and Saeed’s athletic prowess will easily draw in sports fans and Padian brings that same sense of urgency and energy to scenes that take place off the field, from tense, racially charged moments to Tom’s budding romance with a girl he meets at the center...This rich and nuanced title will spark plenty of discussion beyond soccer, and teens primarily attracted to the novel for the sports angle will come away with a greater understanding of issues such as racism and social justice."