DNA: The Story of the Genetic Revolution (Paperback) 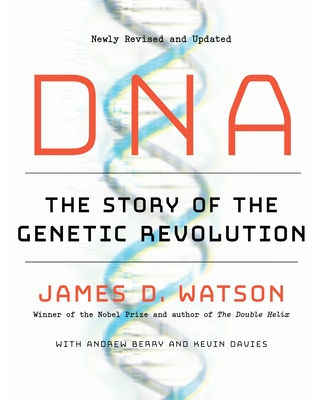 The definitive insider's history of the genetic revolution--significantly updated to reflect the discoveries of the last decade.

James D. Watson, the Nobel laureate whose pioneering work helped unlock the mystery of DNA's structure, charts the greatest scientific journey of our time, from the discovery of the double helix to today's controversies to what the future may hold. Updated to include new findings in gene editing, epigenetics, agricultural chemistry, as well as two entirely new chapters on personal genomics and cancer research. This is the most comprehensive and authoritative exploration of DNA's impact--practical, social, and ethical--on our society and our world.

JAMES D. WATSON was director of Cold Spring Harbor Laboratory in New York from 1968 to 1993 and is now its chancellor emeritus. He was the first director of the National Center for Human Genome Research of the National Institutes of Health from 1989 to 1992. A member of the National Academy of Sciences and the Royal Society, he has received the Presidential Medal of Freedom, the National Medal of Science, and, with Francis Crick and Maurice Wilkins, the Nobel Prize in Physiology or Medicine in 1962.

ANDREW BERRY is a lecturer on Organismic and Evolutionary Biology at Harvard University. A writer and teacher, he is the editor of a collection of the writings of the Victorian biologist Alfred Russel Wallace, Infinite Tropics.

KEVIN DAVIES is the author of The $1,000 Genome and Cracking the Genome. He is the founding editor of NatureGenetics, the world's leading genetics journal, and Bio-IT World magazine. He is the former publisher of Chemical & Engineering News.

"A remarkable alignment of the planets is occurring in 2003: the 50th anniversary of the double helix and the completion of the sequence of the human genome. As a defining figure in both landmark events, no other human being on the planet is positioned to write as authoritatively about all this as Jim Watson. In DNA: The Secret of Life he does so with characteristic clarity, style, and wit. If you really want to know what happened in the most important half-century of biology since the world began, read this!"
–Francis Collins, director of the National Human Genome Research Institute

“Unlocking the secret of life was the greatest accomplishment of science in the 20th century and laid the foundation for medicine in the 21st century. Over the past 50 years, Jim Watson has been at the center of this revolution. No one has a broader perspective. And, no one can tell its story more compellingly. Watson brings alive the grand ideas, human foibles, and social challenges in a way will both engage the general public and inspire a new generation of young scientists.”
–Eric Lander, founder and director of the Whitehead Center for Genome Research

"This is the story of DNA and therefore the story of life, history, sex (lots of sex!), money, drugs, and still-to-be-revealed secrets. DNA is quite a molecule–she's been around a long time and played a lot of roles. At last, she has a truly worthy biographer."
–Mary-Claire King, American Cancer Society Professor, University of Washington School of Medicine

“Only James Watson combines the verve and authority to take us on such an exciting, fast-paced journey into the continuing storm of DNA science. This landmark summary asks where the new biology will take us, and gives arresting vignettes of major participants in the DNA revolution. The key experiments and fascinating unknowns are laid out as plain as day.”
–Victor McElheny, author of Watson and DNA: Making a Scientific Revolution

"James Watson has been an eyewitness to each revolution in molecular biology, from the double helix to the genome. He sees further and clearer than anybody else in the field. Give this fabulously good book to anybody who wants to understand what all the excitement is about."
–Matt Ridley, author of Genome

“Only James Watson could have written this book: no one else knows DNA from so many perspectives—discoverer, scientific leader, author of one of the great scientific memoirs of all time—and no one else writes in such an utterly riveting and independent manner. DNA is a singularly lucid life story of a molecule and its determining role in human nature, society, medicine, and our future as a species. It is an important book and a delight to read.”
--Kay Redfield Jamison, Ph.D., Professor of Psychiatry, Johns Hopkins School of Medicine, and author of An Unquiet Mind.