The Sorceress (The Secrets of the Immortal Nicholas Flamel #3) (Paperback) 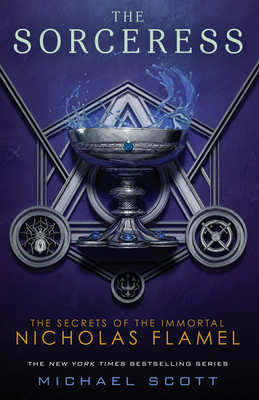 “I have been waiting to continue reading about Nicholas Flamel; his wife, Perenelle; and the twins Sophie and Josh, who are all now in London, surrounded by enemies. Breathtaking in its scope, The Sorceress takes hold and doesn't let go until you turn the very last page.”
— Angela Mann, Kepler's Books & Magazine, Menlo Park, CA

Nicholas Flamel appeared in J.K. Rowling’s Harry Potter—but did you know he really lived? And his secrets aren't safe! Discover the truth in book three of the New York Times bestselling series the Secrets of the Immortal Nicholas Flamel.

The Problem: Perenelle Flamel is trapped.

What’s Worse: Sophie and Josh might soon be as well.

Paris was destroyed by John Dee and Niccolo Machiavelli, but the missing pages of the Book of Abraham the Mage are still protected from Dee and the Dark Elders.    Except Perenelle is imprisoned on Alcatraz and now Scatty is missing, leaving a weakening Nicholas as Sophie and Josh's only protection in Lond, a city Dee has under his control.
The only hope of defeating Dee and escaping London is to find an Elder to teach the twins the third elemental magic—Water Magic. The bad news? The lone option is Gilgamesh the King, and he is absolutely insane.

"The Secrets of the Immortal Nicholas Flamel has everything you loved about Harry Potter, including magic, mystery, and a constant battle of good versus evil."--Bustle

Read the whole series!
The Alchemyst
The Magician
The Sorceress
The Necromancer
The Warlock
The Enchantress

Michael Scott is the New York Times bestselling author of The Secrets of the Immortal Nicholas Flamel series, an authority on mythology and folklore, and one of Ireland’s most successful authors. A master of fantasy, science fiction, horror, and folklore, Michael has been hailed by the Irish Times as “the King of Fantasy in these isles.” The Sorceress is the third book in the Nicholas Flamel series. Look for book one, The Alchemyst; book two, The Magician; book four, The Necromancer; book five, The Warlock; book six, The Enchantress, all available from Delacorte Press. You can follow Michael Scott on Twitter @flamelauthor and visit him at DillonScott.com.

★ “Readers will be swept up.” —Kirkus Reviews, Starred

“Fans of adventure fantasies like Rick Riordan’s Percy Jackson and the Olympians series will eat this one up.” —VOYA

“An exciting and impeccably thought-out fantasy, well-suited for those left in the lurch by Harry Potter’s recent exeunt.” —Booklist