The Necromancer (The Secrets of the Immortal Nicholas Flamel #4) (Paperback) 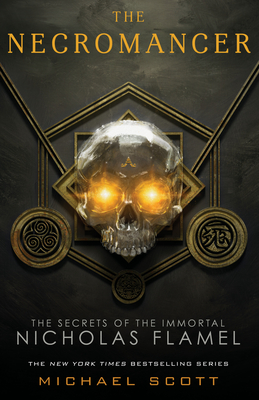 Nicholas Flamel appeared in J.K. Rowling’s Harry Potter—but did you know he really lived? And his secrets aren't safe! Discover the truth in book four of the New York Times bestselling series the Secrets of the Immortal Nicholas Flamel.

The Belief: Sophie and Josh are the twins of prophecy.

The Reality: Nicholas Flamel has been wrong before.

Sophie and Josh Newman are finally home, but they're both more confused than ever about their futures.
Neither of them has mastered the elemental magics they'll need to protect themselves from the Dark Elders, they've lost Scatty, Macchiavelli is coming to unleash on their city the menagerie of monsters imprisoned in Alcatraz, and they're still being pursued by Dr. John Dee. And most disturbing of all is that now they must ask themselves, can they trust Nicholas Flamel?
Worse, can they trust anyone?

Read the whole series!
The Alchemyst
The Magician
The Sorceress
The Necromancer
The Warlock
The Enchantress

Michael Scott is the New York Times bestselling author of The Secrets of the Immortal Nicholas Flamel series, an authority on mythology and folklore, and one of Ireland’s most successful authors. A master of fantasy, science fiction, horror, and folklore, Michael has been hailed by the Irish Times as “the King of Fantasy in these isles.” The Necromancer is the fourth book in the Nicholas Flamel series. Look for book one, The Alchemyst; book two, The Magician; book three, The Sorceress; book five, The Warlock; and book six, The Enchantress, all available from Delacorte Press. You can follow Michael Scott on Twitter @flamelauthor and visit him at DillonScott.com.

★ “Readers will be swept up.” —Kirkus Reviews, Starred

“Fans of adventure fantasies like Rick Riordan’s Percy Jackson and the Olympians series will eat this one up.” —VOYA

“An exciting and impeccably thought-out fantasy, well-suited for those left in the lurch by Harry Potter’s recent exeunt.” —Booklist