The Hero's Way: Walking with Garibaldi from Rome to Ravenna (Hardcover) 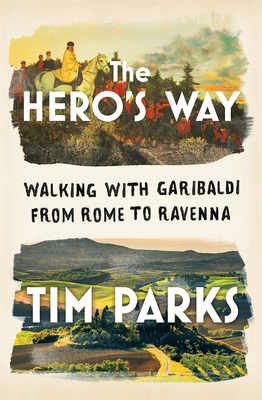 The acclaimed author of Italian Ways returns with an exploration into Italy’s past and present—following in the footsteps of Garibaldi’s famed 250-mile journey across the Apennines.

In the summer of 1849, Giuseppe Garibaldi, Italy’s legendary revolutionary, was finally forced to abandon his defense of Rome. He and his men had held the besieged city for four long months, but now it was clear that only surrender would prevent slaughter and destruction at the hands of a huge French army.

Against all odds, Garibaldi was determined to turn defeat into moral victory. On the evening of July 2, riding alongside his pregnant wife, Anita, he led 4,000 hastily assembled men to continue the struggle for national independence elsewhere. Hounded by both French and Austrian armies, the garibaldini marched hundreds of miles across the Appenines, Italy’s mountainous spine, and after two months of skirmishes and adventures arrived in Ravenna with just 250 survivors.

Best-selling author Tim Parks, together with his partner Eleonora, set out in the blazing summer of 2019 to follow Garibaldi and Anita’s arduous journey through the heart of Italy. In The Hero’s Way he delivers a superb travelogue that captures Garibaldi’s determination, creativity, reckless courage, and profound belief. And he provides a fascinating portrait of Italy then and now, filled with unforgettable observations of Italian life and landscape, politics, and people.

Tim Parks’s acclaimed books about Italy include Italian Ways, Italian Neighbors, and An Italian Education. He is a regular contributor to the New York Review of Books. He lives in Italy.

A dream for armchair globetrotters…Parks intertwines his travelogue with thought-provoking contemplation on leadership, history, memory, politics, idealism and the true meaning of love of country.
— Jeremy Cliffe, The New Statesman

A chronicle of wiliness in defeat and the unlikely escape of a shrinking ragtag volunteer army…[T]he central point of how a seeming military debacle gradually became viewed as 'a glorious act of resistance' is powerfully made.
— Michael Upchurch, The Seattle Times

Soulful…This gripping account of Italy’s visionary past serves as a revealing window into its clouded present.
— Publishers Weekly (starred)