The Light Ages: The Surprising Story of Medieval Science (Paperback) 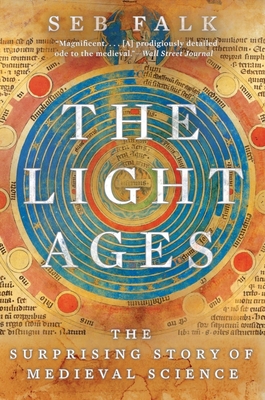 Named a Best Book of 2020 by The Telegraph, The Times, and BBC History Magazine

An illuminating guide to the scientific and technological achievements of the Middle Ages through the life of a crusading astronomer-monk.

"Falk’s bubbling curiosity and strong sense of storytelling always swept me along. By the end, The Light Ages didn’t just broaden my conception of science; even as I scrolled away on my Kindle, it felt like I was sitting alongside Westwyk at St. Albans abbey, leafing through dusty manuscripts by candlelight." —Alex Orlando, Discover

Soaring Gothic cathedrals, violent crusades, the Black Death: these are the dramatic forces that shaped the medieval era. But the so-called Dark Ages also gave us the first universities, eyeglasses, and mechanical clocks. As medieval thinkers sought to understand the world around them, from the passing of the seasons to the stars in the sky, they came to develop a vibrant scientific culture.

In The Light Ages, Cambridge science historian Seb Falk takes us on a tour of medieval science through the eyes of one fourteenth-century monk, John of Westwyk. Born in a rural manor, educated in England’s grandest monastery, and then exiled to a clifftop priory, Westwyk was an intrepid crusader, inventor, and astrologer. From multiplying Roman numerals to navigating by the stars, curing disease, and telling time with an ancient astrolabe, we learn emerging science alongside Westwyk and travel with him through the length and breadth of England and beyond its shores. On our way, we encounter a remarkable cast of characters: the clock-building English abbot with leprosy, the French craftsman-turned-spy, and the Persian polymath who founded the world’s most advanced observatory.

The Light Ages offers a gripping story of the struggles and successes of an ordinary man in a precarious world and conjures a vivid picture of medieval life as we have never seen it before. An enlightening history that argues that these times weren’t so dark after all, The Light Ages shows how medieval ideas continue to color how we see the world today.

Seb Falk is a historian, broadcaster, and lecturer at the University of Cambridge, where he teaches medieval history and history of science. His research is focused on scientific instruments of the Middle Ages. He lives in Cambridge, England.

Magnificent...[Falk lets] us inhabit, for a spell of seven finely crafted chapters, the vibrant mind of a 14th-century Benedictine monk, John Westwyk... [Written] as if John Westwyk and Seb Falk, separated in time but not in spirit, were joining hands while guiding us along; or as if The Light Ages were Mr. Falk’s own clever astrolabe, seeking to make that shimmering light in the distance look, as well it should, wonderfully close and luminously real.

Falk’s bubbling curiosity and strong sense of storytelling always swept me along. By the end, The Light Ages didn’t just broaden my conception of science; even as I scrolled away on my Kindle, it felt like I was sitting alongside Westwyk at St. Albans abbey, leafing through dusty manuscripts by candlelight.

Falk offers a sense of the international nature of medieval scholarship, debunking the image of isolated, repressive monastic communities and highlighting the influence of both Muslim and Jewish innovators.
— Smithsonian Magazine

The Lights Ages…illuminates not just the visionaries of the past but also the troubled state of anti-intellectualism in the modern world.

A wonderful book, as at home bringing to life the obscure details of a Hertfordshire monk as it is explicating the infinite reaches of space and time. Required reading for anyone who thinks that the Middle Ages were a dark age.
— Tom Holland, author of Dominion

Compulsive, brilliantly clear, and superbly well-written, The Light Ages is more than just a very good book on medieval science: it’s a charismatic evocation of another world. Seb Falk uses the monk John of Westwyk to weld us into the medieval ways of imagining as well as thinking. And there are surprises galore for everyone, no matter how knowledgeable they may think they are. I can’t recommend it highly enough.

Like a fictional scientist cloning dinosaurs from wisps of DNA, Seb Falk takes barely surviving fragments of evidence about an almost forgotten astronomer in a storm-chilled, clifftop cell to conjure the vast, teeming world of scientific research, practice, and invention in the Late Middle Ages…Profoundly scholarly, wonderfully lucid, and grippingly vivid, The Light Ages will awe the pedants and delight the public.

— Felipe Fernández-Armesto, author of Out of Our Minds

If you think the term ‘medieval science’ is a contradiction then you should read this hugely enlightening and important book.
— Jim Al-Khalili, author of The World According to Physics

Seb Falk has framed a fascinating book around his personal quest to understand how scientific thinking flourished. The Light Ages reveals the intellectual sophistication that flourished against a backdrop of ritual and liturgy. It offers for most of us a novel perspective on a ‘dark’ historical era, and should fascinate a wide readership.

— Lord Martin Rees, author of On the Future

Long before the word ‘scientist’ was coined, John of Westwyk devised a precision instrument to explore the universe and our place in it. Falk recreates the schooling of this ordinary (if gadget-obsessed) medieval monk in loving detail. There’s a world of science on every page.
— Nancy Marie Brown, author of The Abacus and the Cross