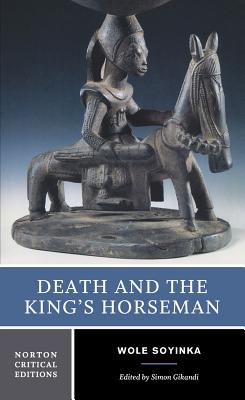 This Norton Critical Edition of Death and the King's Horseman is the only student edition available in the United States. Based on events that took place in 1946 in the ancient Yoruban city of Oyo, Soyinka's acclaimed and powerful play addresses classic issues of cultural conflict, tragic decision-making, and the psychological mindsets of individuals and groups. The text of the play is accompanied by an introduction and explanatory annotations for the many allusions to traditional Nigerian myth and culture.

"Backgrounds and Sources" helps readers understand Death and the King's Horseman's traditional African contexts and the role of theater in African culture. Included are a map of Yoruba-land, discussions of Yoruban religious beliefs and cultural traditions, Soyinka on the various forms that theater has taken in African culture in order to survive, and Anthony Appiah on Soyinka's struggle with the problem of African identity in the creation of Death and the King's Horseman. Commentary on the play as both a theatrical production and a classroom text is provided by Gerald Moore, Tanure Ojaide, and Martin Rohmer.

A Chronology and Selected Bibliography are also included.

Wole Soyinka, one of Africa's foremost writers, won the Nobel Prize in 1986 and is the author of Death and the King's Horseman, among other works.

Simon Gikandi is Robert Hayden Professor of English Language and Literature at the University of Michigan. His books include Reading the African Novel, Writing in Limbo: Modernism and Caribbean Literature, and Maps of Englishness: Writing Identity in the Culture of Colonialism. He is editor of the Ngugi wa Thiong’o volume in the Cambridge Studies in African and Caribbean Literature series. He is presently editing The Encyclopedia of African Literature (Routledge).