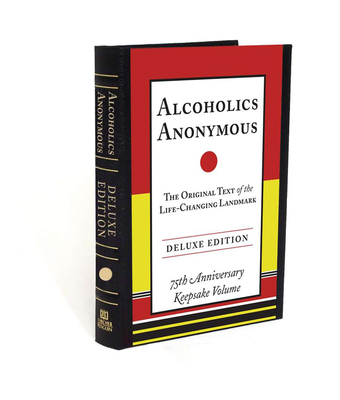 A 75th anniversary keepsake volume of the most important and practical self-help book ever written, Alcoholics Anonymous.

Here is a special deluxe edition of a book that has changed millions of lives and launched the modern recovery movement: Alcoholics Anonymous.

Shrink-wrapped in a vegan-leather hardback casing and slipped into an O-card reminiscent of the book’s original 1939 jacket design, this volume is a lifetime keepsake.

This edition not only reproduces the original 1939 text of Alcoholics Anonymous, but as a special bonus features the complete 1941 Saturday Evening Post article “Alcoholics Anonymous” by journalist Jack Alexander, which, at the time, did as much as the book itself to introduce millions of seekers to AA’s program.

Alcoholics Anonymous has touched and transformed myriad lives, and finally appears in a volume that honors its posterity and impact.

AA cofounder Bill Wilson (1895–1971) was the chief voice and writer behind Alcoholics Anonymous—often called “The Big Book”—on which he collaborated with many figures, including his wife and intellectual partner, Lois Wilson (1891–1988); his AA cofounder, Bob Smith (1879–1950); pioneering AA member Henry Parkhurst (1895–1954); and a wide range of early AAs who contributed stories and strategies.