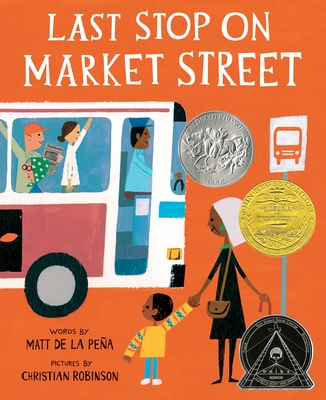 Every Sunday after church, CJ and his grandma ride the bus across town. But today, CJ wonders why they don't own a car like his friend Colby. Why doesn’t he have an iPod like the boys on the bus? How come they always have to get off in the dirty part of town? Each question is met with an encouraging answer from grandma, who helps him see the beauty—and fun—in their routine and the world around them.

This energetic ride through a bustling city highlights the wonderful perspective only grandparent and grandchild can share, and comes to life through Matt de la Pena’s vibrant text and Christian Robinson’s radiant illustrations.


“It’s also the warmth of their intergenerational relationship that will make this book so satisfying, for both young readers and the adults sharing it with them.”—The New York Times Book Review

“Matt de la Peña’s warmhearted story is musical in its cadences…Christian Robinson’s angular, bright illustrations are energetic and vibrant... [A] celebration of the joys of service, the gifts of grandmothers and the tenderness that the city can contain.”—The Washington Post

“The sharp illustrations — in bold, and cheerful primaries — get CJ’s restless energy and curious postures exactly right. The voices of CJ and his grandmother carry the story along in subtle point and counterpoint so that at this book’s quiet close you feel like you’ve been listening to a song.”—The Boston Globe

★ “This celebration of cross-generational bonding is a textual and artistic tour de force.”—Kirkus Reviews, starred review

★ “Like still waters, de la Peña and Robinson’s story runs deep. It finds beauty in unexpected places, explores the difference between what’s fleeting and what lasts, acknowledges inequality, and testifies to the love shared by an African-American boy and his grandmother.”—Publishers Weekly, starred review

★ “De la Peña and Robinson here are carrying on for Ezra Jack Keats in spirit and visual style. This quietly remarkable book will likely inspire questions… it will also have some adult readers reaching for a tissue.”—The Horn Book, starred review

“It’s not often that you see class addressed in picture books in ways that are subtle and seamless, but Last Stop on Market Street, the affectionate story of a young boy and his grandmother, does just that…This ode to gratitude is 2015’s first must-read picture book.”—BookPage

“If Robinson doesn't win this year's Caldecott, then next year could be the one with his name on it. His remarkable Last Stop on Market Street (with Matt de la Peña), is an early favorite for the best picture book of 2015.”—Huffington Post Books

"Bright colors and streamlined shapes keep the urban setting and its denizens cheerful, emphasizing the positive message.”—Bulletin of the Center for Children's Books

“This story is full of figurative language and the art provides a distinct contemporary feel to support this urban story.”—SLC