Beyond the North Wind: Russia in Recipes and Lore [A Cookbook] (Hardcover) 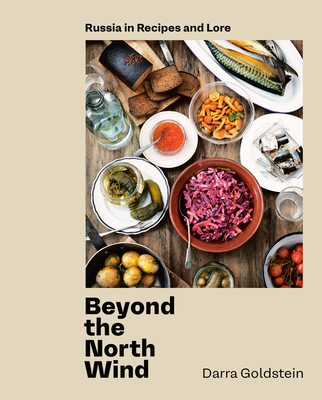 100 traditional yet surprisingly modern recipes from the far northern corners of Russia, featuring ingredients and dishes that young Russians are rediscovering as part of their heritage.

“A necessary resource for food writers and for eaters, a fascinating read and good excuse to make fermented oatmeal.”—Bon Appétit

Russian cookbooks tend to focus on the food that was imported from France in the nineteenth century or the impoverished food of the Soviet era. Beyond the North Wind explores the true heart of Russian food, a cuisine that celebrates whole grains, preserved and fermented foods, and straightforward but robust flavors.

Recipes for a dazzling array of pickles and preserves, infused vodkas, homemade dairy products such as farmers cheese and cultured butter, puff pastry hand pies stuffed with mushrooms and fish, and seasonal vegetable soups showcase Russian foods that are organic and honest--many of them old dishes that feel new again in their elegant minimalism. Despite the country's harsh climate, this surprisingly sophisticated cuisine has an incredible depth of flavor to offer in dishes like Braised Cod with Horseradish, Roast Lamb with Kasha, Black Currant Cheesecake, and so many more.

This home-style cookbook with a strong sense of place and evocative storytelling brings to life a rarely seen portrait of Russia, its people, and its palate—with 100 recipes, gorgeous photography, and essays on the little-known culinary history of this fascinating and wild part of the world.

Darra Goldstein is the author of Fire + Ice, which was nominated for James Beard, IACP, and The Art of Eating awards. The founding editor of Gastronomica: The Journal of Food and Culture, named Publication of the Year by the James Beard Foundation, Darra also serves as series editor of California Studies in Food and Culture, and has written for Gourmet, Saveur, Bon Appétit, and The New York Times.

“I squealed with joy when I learned that Darra was writing this book and the results are even more magnificent that I could have imagined. Beyond the North Wind is at once vividly passionate and methodically researched—a love letter to Russian cooking and hospitality.”—Bonnie Morales, author and chef of Kachka

“This is Darra Goldstein’s masterpiece. Not only is this book full of invaluable research, it is also brimming with warm words and love for real Russia—its people and their wonderful food and unique culture.”—Olia Hercules, author of Mamushka

“In this beautifully written, gorgeously photographed volume, Darra Goldstein captures both the archaic soul of old Russia and the hip new global zeitgeist. Her love letter to the mysterious Russian North brims with revelations, from recipes I can’t wait to make—dandelion blossom syrup! pumpkin pancakes!—to intimate portraits of cooks, erudite historical essays, and evocative travel notes. Part recipe collection, part cultural anthropology, part poetic evocation of place, this is the best kind of cookbook: one that evokes an entire culture at the table.”—Anya von Bremzen, author Mastering the Art of Soviet Cooking

“Ever since I started to cook from Darra Goldstein’s classic book, A Taste of Russia, I have wanted her to return and explore more, to look at what’s happening in Russia now, to see how it has meshed the old with the new. Beyond the North Wind­—rich, delicious, human—has been well worth the wait. Nobody knows more about Russian food and culture than Darra. This is my cookbook highlight of the year.”—Diana Henry, James Beard Award–winning author