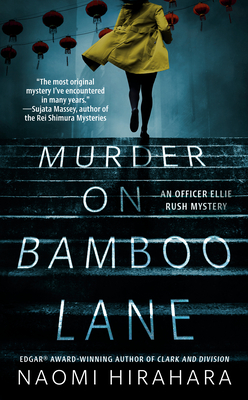 This is book number 1 in the An Officer Ellie Rush Mystery series.

Bike cop Ellie Rush dreams of becoming a homicide detective, but it’s still a shock when the first dead body she encounters on the job is that of a former college classmate.

At the behest of her Aunt Cheryl, the highest-ranking Asian-American officer in the LAPD (a source of pride for Ellie’s grandmother, but annoyance to her mom), Ellie becomes tangled in the investigation of the coed’s murder—with equal parts help and hindrance from her nosy best friend, her over-involved ex-boyfriend, a smoldering detective, and seemingly everyone else in her extended family…only to uncover secrets that a killer may go to any lengths to ensure stay hidden.

Naomi Hirahara is the Edgar® Award-winning author of the Mas Arai Mysteries. Born and raised in Pasadena, Naomi received her bachelor’s degree in international relations from Stanford University and studied at the Inter-University Center for Advanced Japanese Language Studies in Tokyo. She worked as a reporter and editor of The Rafu Shimpo in downtown Los Angeles. She is also the author of 1001 Cranes and has written, edited, and published several nonfiction books, largely about the Japanese American experience. She lives with her husband in Southern California.

"Ellie is a detective of a different sort. Young and resolutely urban, she represents Los Angeles as it is, rather than as it was."—Los Angeles Times

”The most original mystery I’ve encountered in many years.”—Sujata Massey, author of the Rei Shimura mysteries

“One of the warmest, most realistic characters to hit crime fiction in a long time.”—Lee Goldberg, New York Times bestselling co-author of The Heist

“A great series opener! Ellie Rush...is smart and tough...Hirahara paints a mesmerizing portrait of the Los Angeles she knows so well.”—Henry Chang, author of Chinatown Beat

Praise for the Mas Arai Mysteries