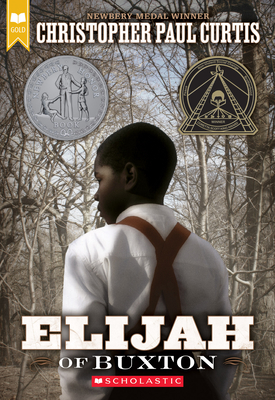 By Christopher Paul Curtis
$7.99
We Can Order This For You

Elijah of Buxton, recipient of the Newbery Honor and winner of the Coretta Scott King Award, joins the Scholastic Gold line, which features award-winning and beloved novels. This edition includes exclusive bonus content!

Eleven-year-old Elijah lives in Buxton, Canada, a settlement of runaway slaves near the American border. Elijah's the first child in town to be born free, and he ought to be famous just for that -- not to mention for being the best at chunking rocks and catching fish. Unfortunately, all that most people see is a "fra-gile" boy who's scared of snakes and tends to talk too much. But everything changes when a former slave steals money from Elijah's friend, who has been saving to buy his family out of captivity in the South. Now it's up to Elijah to track down the thief -- and his dangerous journey just might make a hero out of him, if only he can find the courage to get back home.

Christopher Paul Curtis was awarded both a Newbery Honor and a Coretta Scott King Honor for his debut book, The Watsons Go to Birmingham -- 1963, and won the Newbery Medal and the Coretta Scott King Award for his second book, Bud, Not Buddy. Mr. Curtis is also the author of the Golden Kite Award-winning Bucking the Sarge, as well as Mr. Chickee's Funny Money, Mr. Chickee's Messy Mission, and the Newbery Honor book Elijah of Buxton.

"As in his previous novels, Curtis is a master at balancing the serious and the lighthearted... His latest book is another natural award candidate and makes an excellent case, in a story positively brimming with both truth and sense, for the ability of historical fiction to bring history to life." -- New York Times Book Review

"Curtis has created a vivid setting that is easy to imagine. When the action begins, you'll want to race through the pages." -- The Washington Post

* "This is Curtis's best novel yet, and no doubt many readers, young and old, will finish and say, 'This is one of the best books I have ever read.'" -- Kirkus Reviews, starred review

* "Many readers drawn to the book by humor will find themselves, at times, on the edges of their seats in suspense and, at others, moved to tears. A fine, original novel from a gifted storyteller." -- Booklist, starred review

* "This arresting, surprising novel of reluctant heroism is about nothing less than nobility." -- The Horn Book, starred review

* "Curtis's talent for dealing with painful periods of history with grace and sensitivity is as strong as ever." -- School Library Journal, starred review

"Elijah of Buxton is sure to become a classic -- for readers of all ages." -- BookPage

"The Newbery Medal judges should just go ahead and put Christopher Paul Curtis on speed dial." -- The Christian Science Monitor