Harry Potter And The Goblet Of Fire (Hardcover) 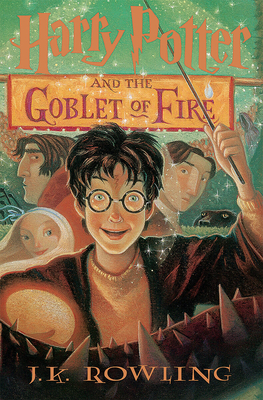 By J.K. Rowling, Mary GrandPré (Illustrator)
$29.99
On Our Shelves Now

This is book number 4 in the Harry Potter series.

Harry Potter and the Sorcerer's Stone

"Readers are in for a delightful romp with this award-winning debut from a British author who dances in the footsteps of P.L. Travers and Roald Dahl. There is enchantment, suspense, and danger galore (as well as enough creepy creatures to satisfy the most bogey-men-loving readers, and even a magical game of soccerlike Quidditch to entertain the sports fans).
---Publishers Weekly, starred review


Harry Potter and the Chamber of Secrets

"the magical foundation so necessary in good fantasy, are as expertly crafted here as in the first book."
--Booklist, starred review


Harry Potter and the Prisoner of Azkaban

"Isn't it reassuring that some things just get better and better?"
--School Library Journal

Harry Potter and the Goblet of Fire

"Rowling seems to have the spell-casting powers she assigns her characters: this fourth volume might be her most thrilling yet. Rowling plants the red herrings, the artful clues and tricky surprises that disarm the most attentive audience. The muscle-building heft of this volume notwithstanding, the clamor for book five will begin as soon as readers finish installment four."
--Publishers Weekly starred review-- July, 2000


"Harry is now l4 years old and in his fourth year at the Hogwarts School of Witchcraft and Wizardry, where big changes are afoot. This year, instead of the usual Inter- House Quidditch Cup, a Triwizard Tournament will be held, during which three champions, one from each of three schools of wizardry (Hogwarts, Durinstrang, and Beaux-batons), must complete three challenging magical tasks. The competitors must be at least 17 years old, but the Goblet of Fire that determines the champions mysteriously produces Harry's name, so he becomes an unwilling fourth contestant. Meanwhile, it is obvious to the boy's allies that the evil Voldemort will use the Tournament to get at Harry. This hefty volume is brimming with all of the imagination, humor, and suspense that characterized the first books. So many characters, both new and familiar, are so busily scheming, spying, studying, worrying, fulminating, and suffering from unrequited first love that it is a wonder that Rowling can keep track, much less control, of all the plot lines. She does, though, balancing humor, malevolence, school-day tedium, and shocking revelantions with the aplomb of a circus performer. The Triwizard Tournament itself is bit of a letdown, since Harry is able, with a little help from his friends and even enemies, to perform the tasks easily. This fourth installment, with its deaths, a sinister ending, and an older and more shaken protagonist, surely marks the beginning of a very exciting and serious baffle between the forces of light and dark, and Harry's fans will be right there with him".-Eva Mitnick, Los Angeles Public Library
--School Library Journal, August 2000


" Was it worth the long, agonizing wait and all the hype and hoopla? You bet! Harry's fourth challenging experience willmore than live up to his myriad fans' expectations--though the 734 pages divided into 37 chapters may be a bit daunting to your readers. The very length, however, allows an even richer tapestry of magical events and humorous escapades, even as the tale takes the long-predicted darker turn. . . . Any inclination towards disbelief on the part of readers is swept away by the very brilliance of the writing. The carefully created world of magic becomes more embellished and layered, while the amazing plotting ties up loose ennds, even as it sets in motion more entanglements. The long climax races relentlessly to a stunning denouement that leaves the way open for the next episode. Le the anticipation be