On Wings of Eagles: The Inspiring True Story of One Man's Patriotic Spirit--and His Heroic Mission to Save His Countrymen (Paperback) 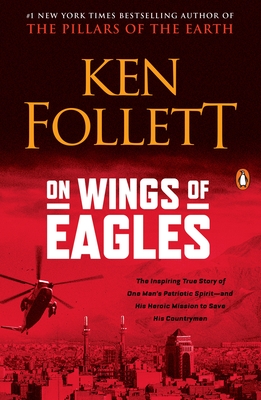 #1 bestselling author Ken Follett tells the inspiring true story of the Middle East hostage crisis that began in 1978, and of the unconventional means one American used to save his countrymen. . . .

When two of his employees were held hostage in a heavily guarded prison fortress in Iran, one man took matters into his own hands: businessman H. Ross Perot. His team consisted of a group of volunteers from the executive ranks of his corporation, handpicked and trained by a retired Green Beret officer. To free the imprisoned Americans, they would face incalculable odds on a mission that only true heroes would have dared. . . .

Ken Follett is one of the world’s best-loved authors, selling more than 160 million copies of his thirty books. Follett’s first bestseller was Eye of the Needle, a spy story set in the Second World War.

In 1989 The Pillars of the Earth was published, and has since become the author’s most successful novel. It reached number one on bestseller lists around the world and was an Oprah’s Book Club pick.

Its sequels, World Without End and A Column of Fire, proved equally popular, and the Kingsbridge series has sold 38 million copies worldwide.

Follett lives in Hertfordshire, England, with his wife Barbara. Between them they have five children, six grandchildren, and three Labradors.

"Ken Follett has combined the best of his journalistic skills and his flair for crackling fiction into a nonfiction work that's sure to be read. . . . This is one time when the mad dogs of the world were soundly defeated by the indomitable Yankee spirit and derring-do. . . . On Wings of Eagles soars." —The Kansas City Star

"Superb. . . . Ken Follett's fans may be reluctant to see him return to fiction." —The New York Times Book Review

"Follett at his most spellbinding." —Boston Herald

"A first-rate bestseller . . . stirring, provocative, as meticulously detailed and as thrilling as Follett's fictional creations." —The Houston Post

"Excellent. . . . Fifteen American executives led by a feisty ex-Army colonel on a hair-raising mission. . . . No Hollywood scriptwriter could match this adventure." —The Cincinnati Enquirer

"Rich in atmosphere, character, and dialogue. . . . Follett is a pro's pro. . . . If this is not a major motion picture, somebody should kick Hollywood back to life." —New York Daily News