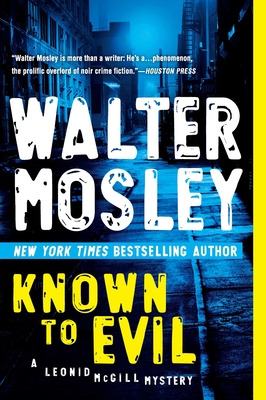 This is book number 2 in the A Leonid McGill Mystery series.

“This time around, Leonid McGill has been asked to find a young woman for a man that he can't refuse. Unfortunately, his sons have disappeared, a former 'client' has been caught in a sting, and he winds up at the site of a double homicide--all at the same time. A fun mystery novel based on the gritty streets of NYC.”
— Mary Cowen, Anderson's Bookshop, Naperville, IL

"The newest of the great fictional detectives" (Boston Globe) from the New York Times bestselling author of the Easy Rawlins novels.

When New York private eye Leonid McGill is hired to check up on a vulnerable young woman, all he discovers is a bloody crime scene-and the woman gone missing. His client doesn't want her found. The reason will put everything McGill cherishes in harm's way: his family, his friends, and his very soul.

Walter Mosley is one of America’s most celebrated, beloved, and bestselling writers. His books have been translated into at least twenty-one languages and have won numerous awards. Born in Los Angeles, Mosley lives in New York City.