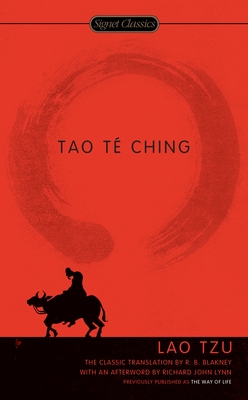 Tao Té Ching is ancient China’s great contribution to the literature of philosophy, religion, and mysticism.

Tao Té Ching contains the time-honored teachings of Taoism and brings a message of living simply, finding contentment with a minimum of comfort, and prizing culture above all else.

This is the lauded translation of the eighty-one poems constituting an Eastern classic, the mystical and moral teachings of which have profoundly influenced the sacred scriptures of many religions—and the lives and happiness of countless men and women through the centuries.

Translated and with an Introduction by R. B. Blakney
and an Afterword by Richard John Lynn

The way of life defined in the Tao Te Ching was developed by ancient sages who lived in China some two thousand years ago. Lao Tzu, known as the Old One, was one such sage who practiced "the way," although there were almost certainly other religious thinkers who contributed further ideas and wisdom to it.

R. B. Blakney, past president of Olivet College, former missionary and teacher in China, and author of many volumes on Eastern religions, made this splendid translation of a great gem of Chinese religion and provided an illuminating interpretative commentary.

Richard John Lynn is Professor Emeritus of Chinese Thought and Literature, Department of East Asian Studies, University of Toronto, Canada. His books include Chinese Literature: A Draft Bibliography in Western European Languages, Guide to Chinese Poetry and Drama, and The Classic of Changes: A New Translation of the I Ching as Interpreted by Wang Bi. He is the editor of James J. Y. Liu’s Language—Paradox—Poetics:  A Chinese Perspective.