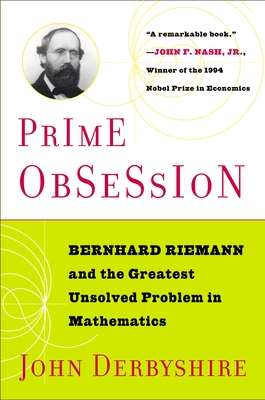 The definitive story of the Riemann Hypothesis, a fascinating and epic mathematical mystery that continues to challege the world.

In 1859, Bernhard Riemann, a little-known thirty-two year old mathematician, made a hypothesis while presenting a paper to the Berlin Academy titled  “On the Number of Prime Numbers Less Than a Given Quantity.”  Today, after 150 years of careful research and exhaustive study, the Riemann Hyphothesis remains unsolved, with a one-million-dollar prize earmarked for the first person to conquer it.

Alternating passages of extraordinarily lucid mathematical exposition with chapters of elegantly composed biography and history, Prime Obsession is a fascinating and fluent account of an epic mathematical mystery that continues to challenge and excite the world.

JOHN DERBYSHIRE is a contributing editor for National Review, where he writes a regular column. He also contributes regularly to National Review Online and writes frequently for a number of other publications, including the Wall Street Journal, the American Conservative, the Washington Examiner, and the New Criterion. In addition to his opinion journalism, he writes on the subject of mathematics and is the author of the books Prime Obsession and Unknown Quantity. His novel, Seeing Calvin Coolidge in a Dream, was chosen as a New York Times Notable Book of the Year. A native of England, Derbyshire now lives on Long Island, New York, with his wife and two children.

"Derbyshire’s attempt to take nonmathematicians into this subject had me on the edge of my seat."—Los Angeles Times

"Riemann and his colleagues come to life as real characters and not just adjectives for conjectures and theorems."—Scientific American