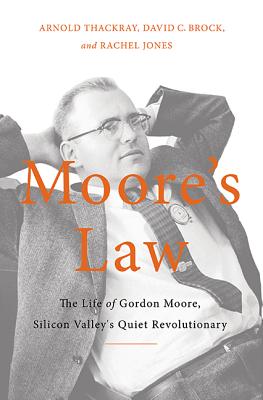 Our world today -- from the phone in your pocket to the car that you drive, the allure of social media to the strategy of the Pentagon -- has been shaped irrevocably by the technology of silicon transistors. Year after year, for half a century, these tiny switches have enabled ever-more startling capabilities. Their incredible proliferation has altered the course of human history as dramatically as any political or social revolution. At the heart of it all has been one quiet Californian: Gordon Moore.

At Fairchild Semiconductor, his seminal Silicon Valley startup, Moore -- a young chemist turned electronics entrepreneur -- had the defining insight: silicon transistors, and microchips made of them, could make electronics profoundly cheap and immensely powerful. Microchips could double in power, then redouble again in clockwork fashion. History has borne out this insight, which we now call "Moore's Law", and Moore himself, having recognized it, worked endlessly to realize his vision. With Moore's technological leadership at Fairchild and then at his second start-up, the Intel Corporation, the law has held for fifty years. The result is profound: from the days of enormous, clunky computers of limited capability to our new era, in which computers are placed everywhere from inside of our bodies to the surface of Mars.

Moore led nothing short of a revolution. In Moore's Law, Arnold Thackray, David C. Brock, and Rachel Jones give the authoritative account of Gordon Moore's life and his role in the development both of Silicon Valley and the transformative technologies developed there. Told by a team of writers with unparalleled access to Moore, his family, and his contemporaries, this is the human story of man and a career that have had almost superhuman effects. The history of twentieth-century technology is littered with overblown "revolutions." Moore's Law is essential reading for anyone seeking to learn what a real revolution looks like.

Arnold Thackray, active in the public life of scholarship, is a distinguished academic and the founding CEO of the Chemical Heritage Foundation.

David C. Brock is a recognized historian of electronics.

Rachel Jones is a London journalist specializing in technology and entrepreneurship.

"I can remember when a transistor radio had one transistor in it--and now a giveaway bottle opener containing 8 billion of them is sitting on my desk. Gordon Moore and a small circle of accomplices, inseparable from the California landscape in which their story took form, were at the center of the most radical transformation in the history of technology. This is a definitive chronicle: authoritative, detailed, and well told."—George Dyson, author of Turing's Cathedral and Darwin Among the Machines

"Almost everyone knows Moore's Law. Almost no one knows the Moore behind this law. Finally a book describing the quiet, unassuming technology godfather of Silicon Valley. A great read about a great man whose work truly changed the world."—Craig R. Barrett, former CEO & chairman, Intel Corporation

"The book is stuffed with Moore's recollections of the crises Intel faced and how they were overcome, including early issues with processing, the occasional collapse of the memory market, the arrival of the Japanese as customers and competitor and their dedication to quality, the microprocessor wars--all these are well worth reading."—EE Journal

"Thackray, Brock and Jones make a compelling argument that Moore was the most important of the three [founders of Intel].... Moore helped build one of the modern economy's foundational companies and in the process established a template for the Silicon Valley start-up company. It's a remarkable legacy, and one worthy of close study for the lessons it has to teach."—The Deal Pipeline

"Moore's Law is an engaging biography and a definitive account of the man behind the famous prediction. The authors are Arnold Thackray, David C. Brock and Rachel Jones--a chemist, a historian and a journalist - whose varied expertise makes for an informed, thorough and readable chronicle.... Gordon Moore's forecast was spectacularly right. Yet, as this compelling biography proves, even if he had never hazarded it, he would remain a legend in Silicon Valley."—Wall Street Journal

"With care and color, Moore's Law tells us how Gordon Moore, at the center of the IT revolution, applied his knowledge and insight in a quiet and effective way. When Gordon talked, everyone listened."—George P. Shultz, former U. S. Secretary of State and Thomas W. and Susan B. Ford Distinguished Fellow at the Hoover Institution, Stanford University

"A remarkable book about a remarkable man, told with great style and refreshing candor."—Carver Mead, the Gordon and Betty Moore Professor Emeritus of Engineering and Applied Science, Caltech and winner of the National Medal of Technology and Innovation

Arnold Thackray and his co-authors integrate business history with the history of science and technology with great success, rendering this biography of Silicon Valley's most important revolutionary a captivating and deeply illuminating read. Moore's Law is also a signal contribution to the study of California history, showing how the social and cultural circumstances of the Bay Area enabled Gordon Moore's creativity.—David A. Hollinger, Preston Hotchkis Professor of History, Emeritus, University of California, Berkeley

"Gordon Moore's story is one of disruptive innovation on the grandest scale, practiced by a brilliant technologist. Now at last we have the book that tells the story. Moore's Law offers a compelling, absorbing account of Silicon Valley, and its role in human progress."—Clayton Christensen, Professor of Business Administration at Harvard Business School, and author of The Innovator's Dilemma

Arnold Thackray, David Brock and Rachel Jones transform Moore from a man 'doing something inscrutable in the margins' to a comprehensible, fiercely driven technophile who shaped history from the inside out."—Nature

"Thackray, Brock, and Jones run through Moore's multifaceted life with a refreshing lack of tech talk or science jargon, revealing a man who realized his dreams while maintaining a stable, affirming personal life."—Publishers Weekly

"[An] admiring, richly detailed book.... [T]echies will be delighted with its full treatment of an important figure often overshadowed by such luminaries as Steve Jobs and Larry Ellison."—Kirkus Reviews

"Finally, Gordon Moore gets the biography he deserves! One of the foremost pioneers of the digital revolution, he is a visionary, engineer, and revered leader. His 'law' defined and guided the growth of computing power, and his business acumen helped to create Silicon Valley. This is an inspiring and instructive tale of how brilliance and leadership can coexist with humility and decency in a truly extraordinary person."—Walter Isaacson, author of Steve Jobs