The Janus Point: A New Theory of Time (Hardcover) 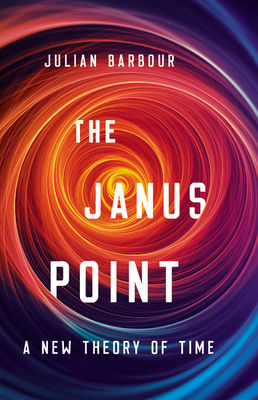 In a universe filled by chaos and disorder, one physicist makes the radical argument that the growth of order drives the passage of time -- and shapes the destiny of the universe. Time is among the universe's greatest mysteries. Why, when most laws of physics allow for it to flow forward and backward, does it only go forward? Physicists have long appealed to the second law of thermodynamics, held to predict the increase of disorder in the universe, to explain this. In The Janus Point, physicist Julian Barbour argues that the second law has been misapplied and that the growth of order determines how we experience time. In his view, the big bang becomes the "Janus point," a moment of minimal order from which time could flow, and order increase, in two directions. The Janus Point has remarkable implications: while most physicists predict that the universe will become mired in disorder, Barbour sees the possibility that order -- the stuff of life -- can grow without bound. A major new work of physics, The Janus Point will transform our understanding of the nature of existence.

Julian Barbour is the author of the highly regarded The Discovery of Dynamics and the bestseller The End of Time. He received his PhD in physics from the University of Cologne in 1968. He is a past visiting professor of physics at the University of Oxford and lives on the edge of the scenic Cotswolds, UK.

"In The Janus Point, physicist Barbour argues with poetic erudition for a solution to the vexing problem of time's apparent one-way flow: a mirrorlike temporal duality in which the big bang is not an explosive cosmic beginning but rather 'a special point on the time line of the universe.'"—Lee Billings, Scientific American

"In his radical new book, Julian Barbour argues that...time flows in not one, but two ways.... Such an argument might seem overly technical, but it's explained simply and accessibly for all to understand."—BBC Science Focus

"The origin of the arrow of time is arguably the most important conceptual problem in cosmology, and the prospect that it can be solved in a universe where time flows 'backward' in the far past is as exciting as it is provocative. In this engaging book, Julian Barbour conveys this excitement admirably, complete with just a bit more detail than professional physicists usually share with the public."
—Sean Carroll, author of From Eternity to Here

"With a rare humanity and a perspective based on a lifetime of study of the history and philosophy of cosmology, Julian Barbour writes a book that is both a work of literature and a masterpiece of scientific thought."—Lee Smolin, author of The Trouble with Physics

"Julian Barbour's infectious enthusiasm for the big ideas in physics is addictive. He has a complete mastery of the history of ideas yet a remarkable lightness and clarity in explaining what are profound concepts. The Janus Point is controversial and gripping, an extraordinary introduction to his view of the universe."—Pedro G. Ferreira, author of The Perfect Theory

"By abandoning the prejudice that particles (atoms, stars...) are confined in a box, Julian Barbour has discovered an unexpected and remarkably simple feature of Newtonian dynamics. It is the basis of his seductive and eloquently presented explanation of the history of the universe, even time itself. Is his cosmology correct? 'Time' will tell."—Michael Victor Berry, MelvilleWills Professor of Physics (Emeritus), Bristol University

"Julian Barbour has no peer when it comes to explaining scientific ideas in a way that is accessible without being simplistic.... This is a fitting sequel to his earlier work and helps to pull together several big ideas that some of us have been watching with fascination for decades."—Neal Stephenson, author of Snow Crash

"Julian Barbour is a profound and original
thinker, with the boldness to tackle some of nature's deepest problems. He is
also a fine writer, and this renders his book -- despite its conceptual
depth -- accessible to anyone who has pondered the mysteries of space and time.
It's a distillation of the author's prolonged investigations, and the insights
that he offers deserve wide readership."—Martin Rees, author of On the Future

"For me the main point of the book was to show history-in-the-making.... The book has given me a lot to ponder. As Gauss said of Riemann's habilitation lecture, ‘it exceeded my expectations.'"—Bill Unruh, professor of physics, University of British Columbia

"In this delightful,
provocative book, Julian Barbour shares his learned insights and passion about deep
questions of time, change, and the origin of the universe with all its
creative variety. A cosmic physics adventure, enlivened with history
and poetry."—Theodore A. Jacobson, professor of physics, University ofMaryland