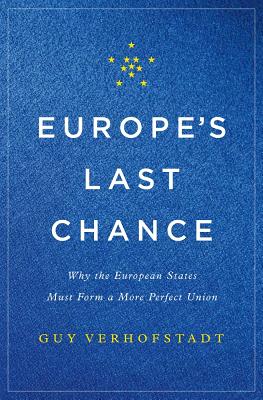 In the heart of Europe's current crisis, one of the continent's foremost statesmen issues a clarion call to radically remake the European Union in the mold of the United States' own federal government

Europe is caught in its greatest crisis since the Second World War. The catalog of ills seems endless: an economic crisis spread through most of Europe's Mediterranean tier that has crippled Greece and driven a wedge between northern and southern Europe; terrorist attacks in Paris, Cologne, Brussels, and Nice; growing aggression from Russia in Ukraine and the Baltic states; and refugees escaping war-torn neighbors. The European Union's inability to handle any of these disasters was a driving factor in Great Britain voting to leave, and others may soon follow. The result won't just be a continent in turmoil, but also a serious threat to American and British security-the Atlantic, let alone the Channel, simply isn't big enough to keep European troubles in Europe. For everyone's sake, Europe must survive.

The question is how. In Europe's Last Chance, Guy Verhofstadt-former prime minister of Belgium and current leader of the liberal faction in the European Parliament-provides the essential framework for understanding Europe today, laying bare the absurdity of a system in which each member state can veto legislation, opt in or out of the Euro, or close borders on a whim. But Verhofstadt does not just indict the European Union, he also offers a powerful vision for how the continent can change for the better. The key, argues Verhofstadt, is to reform the European Union along the lines of America's federal government: a United States of Europe strong enough to stand with the United States of America in making a better, safer world.

A visionary book from one of today's luminaries of European leadership, Europe's Last Chance is a clarion call to save the European Union, one of the world's greatest chances for peace and prosperity.

Guy Verhofstadt was prime minister of Belgium from 1999-2008, and has served in the European Parliament as president of the Alliance of Liberals and Democrats for Europe since 2009. Follow him @GuyVerhofstadt .

"One of the best and most succinct accounts of the EU's negotiating position [regarding Brexit] can be found in Guy Verhofstadt's book Europe's Last Chance."—Simon Head, New York Review of Books

"Europe's Last Chance is a compelling case that Europe must forge a new identity...One of the hidden charms of the book, at least for the American reader, is that Mr. Verhofstadt implores Europe to emulate the U.S. in practically everything."—James Traub, Wall Street Journal

"[Verhofstadt] offers an insider's view, not least of prevailing issues such as Europe's toothless responses to Middle Eastern conflict and Russian belligerence. His hypothetical 'United States of Europe,' predicated on early efforts towards an EU is both hugely ambitious and highly plausible."—Nature

"Verhofstadt, former prime minister of Belgium, issues a call to action in this thoughtful and well-argued policy primer... Impassioned and logically sound, this clearly presented treatise presents an appealing way forward from a troubled present."—Publishers Weekly

"With the entire European project severely threatened, Belgium's former prime minister offers a prescription to save the European Union...[Verhofstadt presents] a proper diagnosis [with] some good medicine."—Kirkus

"You don't have to agree with Verhofstadt to appreciate his blunt, honest, and readable style as he guides us through the current crises. It's the most interesting book on Europe and EU disasters you will read."—Richard Quest, presenter of CNN's Quest Means Business

"A clarion call for Europe's future, written by one of today's leading champions of the European Union. Verhofstadt offers stark warnings and makes a compelling case that none of us can afford to ignore."—John McCormick, Professor of Political Science at Indiana University, and author of Why Europe Matters: The Case for the European Union

"Guy Verhofstadt's post-Brexit, post-Charlie Hedbo portrait of the failings of the European Union is as devastating as his solutions are bold. Those interested in the future of the EU, for both the sake of Europeans and Americans, owe it to themselves to read this spirited book and wrestle with its ideas."—Michael S. Neiberg, author of Potsdam: The End of World War II and the Remaking of Europe