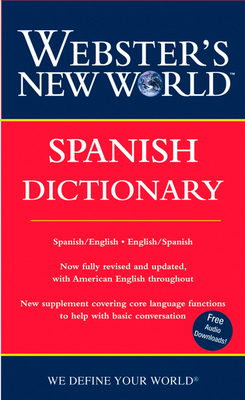 Spanish is the third most widely spoken language in the world, behind Mandarin Chinese and English. Increasingly, Americans want to understand Spanish in order to communicate with workers, customers, and others. This dictionary has more entries than other handily sized Spanish dictionaries. It also gives users free access to audio downloads of the correct pronunciations of key Spanish verbs in all conjugations. Inside, a new supplement helps them with basic conversation. Webster's New World dictionaries are among the most recognized and respected references in the world. This edition features the legible and readable design users are comfortable with, making it easy for them to find the word or definition they need fast.

Chambers Harrap, Ltd. is based in Edinburgh and publishes bilingual dictionaries in a wide variety of foreign languages. The editorial team consists of a cosmopolitan team of lexicographers from the UK, France and Spain who work closely with contributors all around the world. Teams in Mexico and the US play an important role in ensuring that the content of Harraps dictionaries is as international as possible. Editors are able to draw on the extensive databases of widely praised top-of-the-range French and Spanish titles, as well as the latest resources such as linguistic corpora and the Internet.