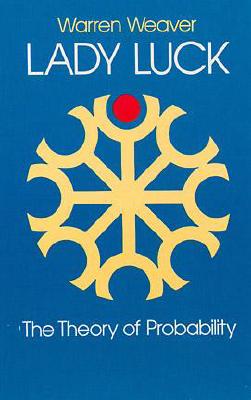 By Warren Weaver
This item is not available.
Out of Print

"Should I take my umbrella?" "Should I buy insurance?" "Which horse should I bet on?" Every day ― in business, in love affairs, in forecasting the weather or the stock market questions arise which cannot be answered by a simple "yes" or "no." Many of these questions involve probability. Probabilistic thinking is as crucially important in ordinary affairs as it is in the most abstruse realms of science.
This book is the best nontechnical introduction to probability ever written. Its author, the late Dr. Warren Weaver, was a professor of mathematics, active in the Rockefeller and Sloan foundations, an authority on communications and probability, and distinguished for his work at bridging the gap between science and the average citizen. In accessible language and drawing upon the widely diverse writings of thinkers like Kurt Godel, Susanne K.Langer, and Nicholas Bernoulli, Dr. Weaver explains such concepts as permutations, independent events, mathematical expectation, the law of averages, Chebychev's theorem, the law of large numbers, and probability distributions. He uses a probabilistic viewpoint to illuminate such matters as rare events and coincidences, and also devotes space to the relations of probability and statistics, gambling, and modern scientific research. Dr. Weaver writes with wit, charm and exceptional clarity. His mathematics is elementary, grasp of the subject profound, and examples fascinating. They are complemented by 49 delightful drawings by Peg Hosford. 13 tables. 49 drawings. Foreword. Index.

Warren Weaver: A Prolific Mind Warren Weaver (1894-1978) was an engineer, mathematician, administrator, public advocate for science, information age visionary, and author or co-author of many books including the one on which his authorial fame mostly rests, his and Claude Shannon's epoch-making 1949 work, The Mathematical Theory of Communication. A man with a restless intelligence, he also wrote an early seminal work on the theory of machine translation, a unique work on the publishing history of Alice in Wonderland in the many languages into which it has been translated, Alice in Many Tongues, and the book which introduced the Sputnik generation and their followers to the intricacies and enjoyment of the basic concepts of probability, Lady Luck: The Theory of Probability. This book, first published in 1963, has been a fixture on the Dover list since 1982. From the Book: "I say that you may at the moment be almost bored at the prospect of thinking about thinking. But this book is going to introduce you to a special way of thinking, a special brand of reasoning, which, I am confident, you will find not only useful, but fun as well. It will be about a type of thinking that, when stated boldly, seems a little strange. For we often suppose that we think with the purpose of coming to definite and sure conclusions. This book, on the contrary, deals with thinking about uncertainty." In the Author's Own Words: "We keep, in science, getting a more and more sophisticated view of our essential ignorance." -- Warren Weaver