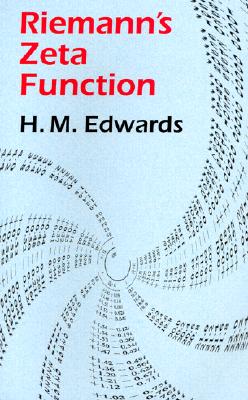 Bernhard Riemann's eight-page paper entitled "On the Number of Primes Less Than a Given Magnitude" was a landmark publication of 1859 that directly influenced generations of great mathematicians, among them Hadamard, Landau, Hardy, Siegel, Jensen, Bohr, Selberg, Artin, and Hecke. This text, by a noted mathematician and educator, examines and amplifies the paper itself, and traces the developments in theory inspired by it. (An English translation of the original document appears in the Appendix.)
Topics include Riemann's main formula, the prime number theorem, de la Vall e Poussin's theorem, numerical analysis of roots by Euler-Maclaurin summation, the Riemann-Siegel formula, largescale computations, Fourier analysis, zeros on the line, the Riemann hypothesis and Farey series, alternative proof of the integral formula, Tauberian theorems, Chebyshev's identity, and other related topics.
This inexpensive edition of Edwards' superb high-level study will be welcomed by students and mathematicians. Mathematically inclined general readers will likewise value this influential classic.