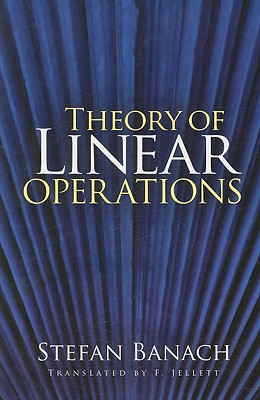 Created by the founder of modern functional analysis, this is the first text on the theory of linear operators, written in 1932 and translated into English in 1987. Author Stefan Banach's numerous mathematical achievements include his theory of topological vector spaces as well as his contributions to measure theory, integration, and orthogonal series. In this volume, he articulates the theory of linear operators in terms of its aesthetic value, in addition to expressing the scope of its arguments and exploring its many applications.
The author focuses on results concerning linear operators defined principally in Banach spaces. He interprets general theorems in a variety of areas, including group theory, differential and integral equations, equations with infinitely many unknowns, functions of a real variable, summation methods, and orthogonal series. In addition to his use of algebraic tools, Banach employs the methods of general set theory. Extensive supplementary material on the theory of Banach spaces appears at the end of the text. Suitable for advanced undergraduate and graduate courses, this classic is recommended for all students of applied functional analysis.

Polish mathematician Stefan Banach (1892-1945) laid the foundations of functional analysis in his doctoral thesis, and he continued to refine the concept throughout his life. His numerous contributions to mathematics include the introduction and development of the concept of complete normed linear spaces, known today as Banach spaces.