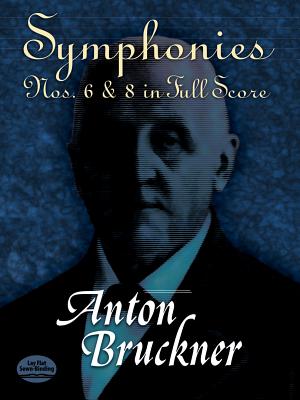 With their rich harmonic language and complex polyphony, these works are exemplars of Austro-Germanic Romanticism. Nicknamed The Philosopher's Symphony, Bruckner's hour-long Sixth Symphony is among his shorter works. The Eighth, the final symphony Bruckner completed before his death, is dedicated to Emperor Franz Joseph of Austria and is known as The Apocalyptic.
This inexpensive compilation is the only single-volume version of these two works. Reproduced from an authoritative edition, it features a sturdy sewn binding that enables it to open flat on music stands and provide years of use and enjoyment.

A giant among 19th-century symphonic composers, Anton Bruckner (1824-96) is also well known for his masses, motets, and choral works. A deeply pious Roman Catholic, the Austrian composer imbued his works with a timeless spirituality.