The Book on Games of Chance: The 16th-Century Treatise on Probability (Dover Recreational Math) (Paperback) 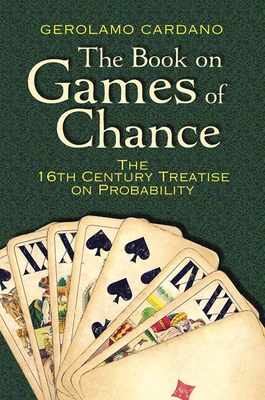 Mathematics was only one area of interest for Gerolamo Cardano ― the sixteenth-century astrologer, philosopher, and physician was also a prolific author and inveterate gambler. Gambling led Cardano to the study of probability, and he was the first writer to recognize that random events are governed by mathematical laws.
Published posthumously in 1663, Cardano's Liber de ludo aleae (Book on Games of Chance) is often considered the major starting point of the study of mathematical probability. The Italian scholar formulated some of the field's basic ideas more than a century before the better-known correspondence of Pascal and Fermat. Although his book had no direct influence on other early thinkers about probability, it remains an important antecedent to later expressions of the science's tenets.

Mathematics was only one area of interest for Gerolamo Cardano (1521-76). The Italian astrologer, philosopher, physician, and scholar was also a prolific author and inveterate gambler. Dover also publishes Cardano's The Rules of Algebra.Sydney Henry Gould is a mathematician and author of Russian for the Mathematician.Samuel S. Wilks (1906-64) was a mathematician who taught at Princeton and made significant contributions to the field of mathematical statistics.