Mythomania: Tales of Our Times, from Apple to Isis (Hardcover) 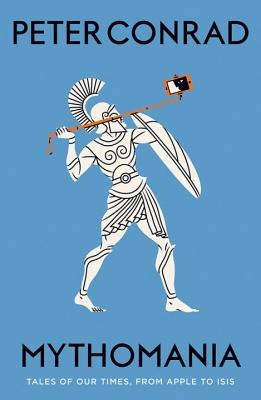 Weaves ancient myth into modern celebrity and consumerist culture to expose the absurdity and occasional insanity of twenty-first-century society, economy, and politics

Despite a proclaimed respect for scientific reason, humans are still as intrigued by myth as their remote ancestors. Laptops and smartphones are sold under a logo that invokes the forbidden fruit of the Garden of Eden; skimpily clad classical nymphs cavort in TV reality shows; Narcissus makes a comeback whenever we snap a selfie. Mythical creatures such as handsome vampires abound in best-selling novels. Myth has also invaded the political realm, now that terrorists brandish black flags and recite theological mantras as they martyr themselves.

In twenty-seven self-contained entries, Conrad illuminates in his own remarkable way subjects from the British Queen to the Kardashians, via Banksy, vaping, and the inception of the Large Hadron Collider. In Judge Judy, he shows a matronly Roman goddess dispensing justice with a fly swatter. In the metamorphosis of Caitlyn Jenner from Olympic athlete and paterfamilias into idealized female form, he finds parallels to the transformations of the residents of Mount Olympus.

Peter Conrad taught English literature at Christ Church, Oxford, for four decades. He has written more than twenty books, including Orson Welles: The Stories of His Life; The Hitchcock Murders; How the World Was Won: The Americanization of Everywhere; Creation: Artists, Gods, and Origins; Modern Times, Modern Places: Life and Art in the Twentieth Century; and Mythomania: Tales of Our Times from Apple to ISIS.

A deft updating of Parisian semiotics and midcentury cultural criticism for our own time. If you're a fan of Barthes and of the Umberto Eco of How to Travel with a Salmon, you'll likely enjoy this entertaining rejoinder, [a] look at the hidden structures and unacknowledged tendencies of our day.