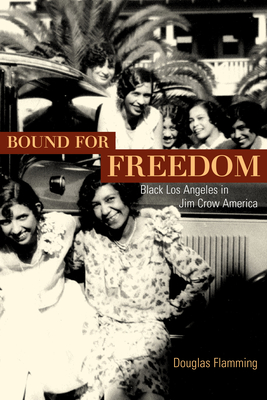 By Douglas Flamming
This item is not available.

Paul Bontemps decided to move his family to Los Angeles from Louisiana in 1906 on the day he finally submitted to a strictly enforced Southern custom—he stepped off the sidewalk to allow white men who had just insulted him to pass by. Friends of the Bontemps family, like many others beckoning their loved ones West, had written that Los Angeles was "a city called heaven" for people of color. But just how free was Southern California for African Americans?

This splendid history, at once sweeping in its historical reach and intimate in its evocation of everyday life, is the first full account of Los Angeles's black community in the half century before World War II. Filled with moving human drama, it brings alive a time and place largely ignored by historians until now, detailing African American community life and political activism during the city's transformation from small town to sprawling metropolis.

Writing with a novelist's sensitivity to language and drawing from fresh historical research, Douglas Flamming takes us from Reconstruction to the Jim Crow era, through the Great Migration, the Roaring Twenties, the Great Depression, and the build-up to World War II. Along the way, he offers rich descriptions of the community and its middle-class leadership, the women who were front and center with men in the battle against racism in the American West.

In addition to drawing a vivid portrait of a little-known era, Flamming shows that the history of race in Los Angeles is crucial for our understanding of race in America. The civil rights activism in Los Angeles laid the foundation for critical developments in the second half of the century that continue to influence us to this day.

Douglas Flamming is Associate Professor of History at the Georgia Institute of Technology and author of Creating the Modern South: Millhands and Managers in Dalton, Georgia, 1884–1984 (1992), winner of the Philip Taft Labor History Award.