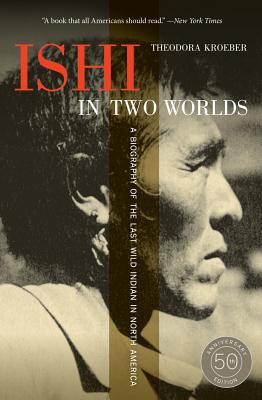 An essential biography and historical document, Ishi's deeply moving life story is critical to understanding the legacies of white violence and Indigenous survival on the land we call California.

First published in 1961, Ishi in Two Worlds tells the life story of the last known surviving member of the Yahi people, an indigenous community decimated by invasion and genocide at the hands of white settlers during the California Gold Rush. The man, whose real name we will never know, lived for decades in the Mount Lassen foothills of the Sierra Nevada before being captured by Americans near Oroville in 1911. Anthropologists at the University of California named him Ishi, the Yana word for man, and brought him to San Francisco where he spent the rest of his life detained at the University’s Museum of Anthropology under the custody of Alfred Louis Kroeber.

Theodora Kroeber’s Ishi in Two Worlds offers an intimate glimpse into the remarkable life of a resilient man facing harrowing, unforgivable circumstances. Drawing from her husband’s records, linguistic notes, and archival and oral histories, Kroeber presents a contested history of North American indigenous people and the atrocities of violence, abuse, and disease wrought by white men. Reckoning with the indefensible history of racism and dehumanization that led to Ishi’s alienation and detention, this canonical book is critical to the history of anthropology and to the ongoing work of accountability in the field. It remains an essential historical document, and an enduring record of Ishi’s incredible life.

Theodora Kroeber (1897–1979) was a noted anthropologist and the author of many books, including The Inland Whale. Her husband and collaborator was Alfred Louis Kroeber. Karl Kroeber (1926-2009) was Mellon Professor in the Humanities at Columbia University and coeditor, with Clifton Kroeber, of Ishi in Three Centuries. He was the son of Theodora and Alfred Kroeber. Lewis Gannett (1891-1966) was a critic for the New York Herald-Tribune.

"Let me put it to you in these terms: If you read no other book this year, you must read this one."
— Los Angeles Times

"A book that all Americans should read."
— New York Times

"This book is remarkably lively and interesting anthropology."
— Atlantic

"Kroeber's book, one of the few scholarly volumes of this [the 20th] century to reach the best seller list, presents a sensitive and sympathetic discussion of this 'stone age' man. . . . As a biography, this book is remarkable. As a reference work on central California ethnology it is outstanding. As a record of acculturation-of carefully observed sudden impingement of one culture upon another-it is unique, and its record of psychological reactions is worthy of careful note."
— American Anthropologist

"The story of Ishi is indescribably sad. Theodora Kroeber has told it concisely, factually, sympathetically, and beautifully. She has avoided the excesses of pathos or condemnation to which such a story lends itself."
— Ethnohistory

“One of the first widely read books to offer an unvarnished account of the near-extermination of indigenous Californians in the late 19th century. . . . [which] remains a staple of that state’s high-school curriculum.”
— Chronicle of Higher Education

"If we wish to know something of the inhabitants of this continent before Western Man arrived, what is surely known of them, what they believed, what our part was in their ultimate fate, this book can give many answers. And the answers are truly moving, elements of drama and high tragedy."
— American Scientist

"Kroeber's book, one of the few scholarly volumes of this [the 20th] century to reach the best seller list, presents a sensitive and sympathetic discussion of this 'stone age' man. . . . As a biography, this book is remarkable. As a reference work on central California ethnology it is outstanding. As a record of acculturation-of carefully observed sudden impingement of one culture upon another-it is unique, and its record of psychological reactions is worthy of careful note."
— American Anthropologist

"Through it all, Ishi emerges a man, an individual; always a man who himself embodied not only the history of his people, but also an acceptance of the world that destroyed them. That she has been able to accomplish this blend of personal reality and symbol, while at the same time telling an important story, is Mrs. Kroeber's triumph."
— Social Forces

"Either as an historical or ethnographic document, or as the moving narrative of an appealing human being, this book must be regarded as a truly worthwhile addition to the literature."
— Journal of American Folklore

"One of the reasons that Ishi stands out so clearly is that Mrs. Kroeber has recon- structed this background history with such thoroughness and skill. The biography does justice to the man and his two worlds."
— Pacific Historical Review

"The extremely readable, seemingly effortless style produced by Theodora Kroeber is that of a master craftsman. . . . The techniques which Mrs. Kroeber applies to the handling of historical materials are well worth study by anyone interested in presenting history in valid, yet interesting, form."
— Hispanic American Historical Review

"A unique and vividly written account of the successive steps in the extinction of an aboriginal California people."
— Annals of the American Academy of Political and Social Science

"Kroeber, after compiling all the facts with careful research and questioning, has produced a beautifully written, fascinating, and accurate book."
— Pacific Northwest Quarterly

"Ishi is probably the best book concerning American Indians yet written. Were one to read no other book about American Indians, this one would do."
— Arizona and the West

"All in all, this is a perceptive and humane study of Ishi by a writer of sensitivity and intuition."
— Plains Anthropologist