The Abortionist: A Woman against the Law (Paperback) 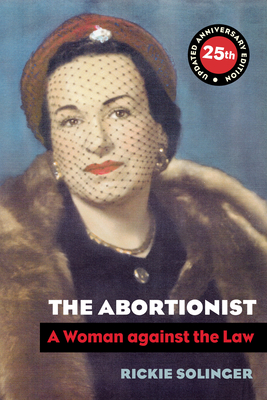 This twenty-fifth anniversary edition places abortion politics in the context of reproductive justice today and explains why abortion has been—and remains—a political flashpoint in the United States.

Before Roe v. Wade, hundreds of thousands of illegal abortions occurred in the United States every year. Rickie Solinger tells the story of Ruth Barnett, an abortionist in Portland, Oregon, from 1918 to 1968, to demonstrate how the law, not back‑alley practitioners, endangered women’s lives in the years before legalized abortion. Women from all walks of life came to Barnett, who worked in a proper office, undisturbed by legal authorities, and never lost a patient. But in the illegal era following World War II, Barnett and other practitioners were hounded by police and became targets for politicians; women seeking abortions were forced to turn to syndicates run by racketeers or to use self‑induced methods that often ended in injury or death.

This new edition places abortion politics in the context of reproductive justice today. Despite the change in women’s status since Barnett’s time, key cultural and political meanings of abortion have endured. Opponents of Roe v. Wade continue their efforts to recriminalize abortion and reestablish an inexorable relationship between biology and destiny. The Abortionist is an instructive reminder that legal abortion facilitated women’s status as full members of society. Barnett’s story clarifies the relationship of legal abortion to human dignity and shows why preserving and extending Roe v. Wade ensures women’s freedom to decide for themselves what is best for their health.

Rickie Solinger is a historian and curator and the author or editor of many books about reproductive politics, including Wake Up Little Susie: Single Pregnancy and Race before Roe v. Wade and, with Loretta Ross, Reproductive Justice: An Introduction.

""A vivid account that skillfully reclaims the life of yet another unusual woman who refused to live precisely by the rules."
— New York Times Book Review