The Lost Art of Scripture: Rescuing the Sacred Texts (Paperback) 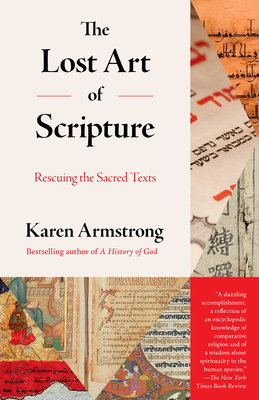 “[An] unusual, often dazzling, blend of theology, history, and neuroscience” —The New Yorker

The significance of scripture may not be immediately obvious in our secular world, but its misunderstanding is perhaps the root cause of many of today's controversies. The sacred texts have been co-opted by fundamentalists, who insist that they must be taken literally, and by others who interpret scripture to bolster their own prejudices. These texts are seen to prescribe ethical norms and codes of behavior that are divinely ordained: they are believed to contain eternal truths. But as Karen Armstrong shows in this chronicle of the development and significance of major religions, such a narrow, peculiar reading of scripture is a relatively recent, modern phenomenon. For most of their history, the world's religious traditions have regarded these texts as tools that enable the individual to connect with the divine, to experience a different level of consciousness, and to help them engage with the world in more meaningful and compassionate ways.

KAREN ARMSTRONG is the author of numerous books on religious affairs, including The Case for God, A History of God, The Battle for God, Holy War, Islam, Buddha,and The Great Transformation, as well as a memoir, The Spiral Staircase. Her work has been translated into forty-five languages. In 2008 she was awarded the TED Prize and began working with TED on the Charter for Compassion, created online by the general public, and crafted by leading thinkers in Judaism, Christianity, Islam, Hinduism, Buddhism, and Confucianism. The charter was launched globally in the fall of 2009. She is currently an ambassador for the United Nations Alliance of Civilizations.

ONE OF THE CHRISTIAN SCIENCE MONITOR'S BEST BOOKS OF THE YEAR

"A dazzling accomplishment, a reflection of encyclopedic knowledge of comparative religion and of a wisdom about spirituality in the human species." —The New York Times Book Review

“A penetrating look at scriptures . . . She writes with panache . . . There are always surprising bits of history and flashes of insight.”—Booklist

“In her most profound, important book to date . . . Both nonbelievers and believers will find her diagnosis—that most people now read scripture to confirm their own views, rather than to achieve transformation—on the mark . . . This is an instant classic of accessible and relevant religious history.”—Publishers Weekly [starred review]

“As in Armstrong’s many previous works of popular religious-historical synthesis, the breadth of knowledge on display is formidable.”—Harper’s

“A manifesto . . . A panoramic tour of religious history . . . Armstrong is an exceptional storyteller, and The Lost Art of Scripture is an amazing story. It is, admirably, a compendium of religious philosophy.”—The Washington Post

“In her latest, esteemed religion writer Armstrong . . . once again demonstrates her encyclopedic knowledge of the world’s religions. . . . Armstrong’s grasp of global religious history and thought is beyond impressive . . . For those willing to travel this road with the author, the journey is expansive and worthwhile and will make them reconsider what scripture means to those who admire it. Excellent reading for religious scholars and students.”—Kirkus Reviews

“Formidable . . . serious and inspiring . . . exhilarating, challenging and curiously comforting . . . Written not only with intellectual rigor and an accessible turn of phrase, but also with love.”—Prospect Magazine

“A glorious journey . . . Armstrong is the most articulate and generous-hearted exegete of religion writing in English at the present time.”—The New Statesman

“Armstrong is on good form in The Lost Art of Scripture. It exhibits her well-known and admired characteristics as a writer: an ability to be both authoritative on all the major faiths, and studiedly neutral as to which offers the best solutions/worst failings; a reasoned insistence that religion today is misunderstood, as much by the religious as by their critics; and a passionate appeal to our fractious and fractured world to embrace religion’s core message . . . It makes for a compelling read, impressive in the range of its scholarship, but always cogently expressed for those prepared to commit to the search to understand.”—The Sunday Times

“Rich and wide-ranging . . . A fascinating read . . . This is a treasure chest of social and religious history. Armstrong’s lucid prose makes her many-stranded story remarkably straightforward to follow . . . a learned and stimulating book.”—The Tablet