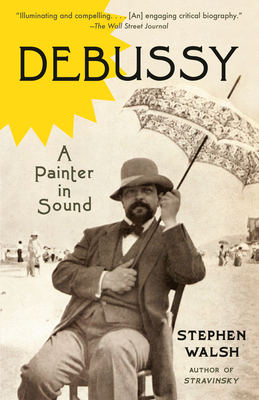 One of the most revered composers of the twentieth century, Claude Debussy (1862–1918) achieved the unheard of: he reinvented the language of music without alienating the majority of music lovers. Debussy drove French music into entirely new regions of beauty and excitement at a time when old traditions threatened to stifle it. Yet despite his profound influence on French culture, Debussy’s own life was complicated and often troubled by struggles over money, women, and ill health. Here, Stephen Walsh, acclaimed author of Stravinsky, chronicles both the composer himself and the unique moment in European history that bore him. Walsh’s engagingly original approach is to enrich a lively biography with analyses of Debussy’s music: from his first daring breaks with the rules as a Conservatoire student to his achievements as the greatest French composer of his time.

Stephen Walsh is Emeritus Professor of Music at Cardiff University and the author of a number of books on music including Musorgsky and His Circle and the prizewinning, two-volume biography of Igor Stravinsky. He served for many years as deputy music critic for The Observer and writes reviews for a variety of publications. He lives in Herefordshire, England.

“Walsh is a deep reader of Debussy’s music with an uncommon ability to translate complex details into words that are precise yet evocative and that are refreshingly free of academic jargon. . . . [He] treats Debussy both as a creature of his own time and as a harbinger of 20th-century modernism.” —John Adams, The New York Times Book Review

“[Walsh] explores [Debussy’s] genius with erudition and style.” —The Atlantic

“[A] finely tooled biography. . . . [Walsh] insists on pulling Debussy’s compositions into the heart of this biography, treating them as the essential register of emotional and intellectual existence.” —The Guardian

“Walsh has managed the rare tightrope act of describing and analyzing widely beloved music in ways that will neither seem simplistic to connoisseurs nor confuse a general audience.” —The New York Review of Books

“Excellent . . . A lucid and elegant introduction to the French revolutionary.” —The Times (London)

“Impeccably researched and intellectually engrossing . . . This is a thorough and important study of the composer who forever changed the direction of music in our time.” —Stuart Isacoff, author of When the World Stopped to Listen: Van Cliburn’s Cold War Triumph and Its Aftermath

“[A] wonderfully warm, wise and witty book about the greatest French composer of the modern era. As a comprehensive and integrated survey of Debussy’s life and work, it could hardly be bettered.” —The Literary Review

“An enjoyable and impressive achievement. . . . Walsh depicts Debussy’s Paris with the same verve and scholarship that he applies to the man.” —The Economist

“Walsh is one of our most insightful writers on music, and his judgment always illuminates what it touches. . . . Debussy: A Painter in Sound concentrates on what truly matters.” —The Spectator

“[A] brilliant gem of a book. [Walsh] has made me want to relisten to and re-reflect on every piece Debussy ever wrote.” —Harvey Sachs, author of Toscanini: Musician of Conscience

“Fascinating . . . Walsh is a superb guide to [Debussy’s] music.” —The Observer

“A sensuous portrait of an iconic composer. . . . A richly detailed life of a modernist master.” —Kirkus Reviews (starred review)

“The author weaves the composer’s life and loves, his penny-pinching habit of eating, schoolboy-style, a crust of bread and chocolate bar for lunch, with discussions of modes and chords, cadences and pentatonic scales, all lucidly explained.” —The Times Literary Supplement

“The book shines a welcome light on the composer, his music, and his times.” —Library Journal

“Stephen Walsh has produced a wonderfully detailed biography of a truly groundbreaking composer.” —John Powell, author of How Music Works