Kingston and the Echoes of Magic (Hardcover) 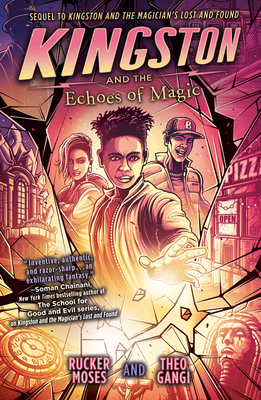 In this duology's finale, Kingston travels back in time and uses his growing magic to save the world.

Kingston might have saved Echo City but the victory is bittersweet without his pops by his side. The holidays are approaching and if Kingston could have one wish, it would be to have his father, who is trapped in the Realm, come home. But as new problems arise and blackouts blanket the city, Kingston begins to have a persistent feeling of déjà vu, as if he's lived this same day before—and he has. Echo City living up to its name, is caught in a repeating time loop.

Maestro, his father's old rival, has found a way to overwrite reality with an alternate timeline where he rules over all. It will be up to Kingston, Too Tall, and V to find a way to enter the Realm and travel back through time to stop him. But with a magic he still barely understands, Kingston will needs his friends’ smarts and their collective courage to figure out the mystery and find Maestro before Brooklyn as they know it is erased for good.

Rucker Moses is the pen name of Craig S. Phillips and Harold Hayes Jr. They both hail from Atlanta and started telling stories together at the University of Georgia. Together, they've been nominated for three Emmys for writing in a children's program and have written for TV shows based on books by R. L. Stine and Christopher Pike. They also make virtual reality experiences and own a production company named SunnyBoy Entertainment. In no particular order, their favorite things to write about are ninjas, magic, space, and abandoned amusement parks. When not doing all that, they are hanging with their wonderful families at home in Los Angeles.

Theo Gangi is a novelist and writing teacher based in Brooklyn. He's written several acclaimed novels and short stories, and he's worked on shows for Netflix. He writes far-out adventures that happen right next door. He directs the MFA program at St. Francis College and lives with his wife, young son, and their dog.

Praise for Kingston and the Echoes of Magic:

“Readers who enjoyed Kingston and the Magician’s Lost and Found will welcome this brisk sequel that maintains the engaging tone of the first series entry and entertainingly incorporates information about ancient Egyptian gods. . . An illuminating sequel.” —Kirkus Reviews

Praise for Kingston and the Magician's Lost and Found:

“Intricately crafted twists at every turn keep the determined crew on their toes. The action is well paced, giving readers time to savor the myriad colorful characters who interact with the clue chasers. . . An enjoyable addition to most middle school mystery collections.” —School Library Journal

“Full of heart, magic, and mystery, this is the kind of book that makes you love books. Absolutely fantastic!” —Sarah Beth Durst, award-winning author of Catalyst

"Coded messages, characters who plainly know more than they're saying, doppelgangers, and secret schemes...all come together in a...breathlessly paced tale...should leave readers even more delighted that the stage is set for sequels." —Booklist

“Inventive, authentic, and razor-sharp, Kingston and the Magician’s Lost and Found is at once an exhilarating fantasy and a moving tale of how far a father and son are willing to go for one another. Rucker Moses and Theo Gangi put aside familiar tropes to build something new, an underground New York City, filled with magic and secrets, that challenges readers to solve its mysteries alongside its main character. As for Kingston, we’ve never seen anything like him—a young Black superhero determined to put the magic back in Brooklyn. He’s sharp, feisty, funny, and always a step ahead. This is a special book, the kind that you fall in love with, because beneath the fun and twists, shining through is Kingston’s big, bold heart.” —Soman Chainani, New York Times bestselling author of The School for Good and Evil series

"This brisk first-person narrative will appeal especially to readers who like puzzles and illusions… engaging plot and history of Black magician....A likable, otherworldly adventure with a bit of a mystery." —Kirkus Reviews

“The text is zippy and animated, reading more like a screenplay than a novel, and the secondary characters are splashy . . . Kingston is a carefully balanced mix of optimistic, jaded, and grief-stricken, moving through the world with more hope than the grownups who surround him.” —The Bulletin of the Center for Children’s Books