Treasure of the World (Paperback) 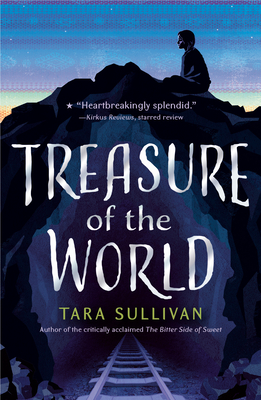 A young girl must find a way to help her family survive in a desolate and impoverished Bolivian silver mining community in this eye-opening tale of resilience. Now in paperback.

Twelve-year-old Ana wants nothing more than to escape the future set for her and her classmates in her small mining village. Boys her age are beginning to leave school to become silver miners and girls her age are destined to one day be their wives. So when her oft-ill eleven-year-old brother is forced by their demanding father to start work in the mines, Ana gives up her dreams of school to volunteer in his place. But the world of silver mining is dark and dangerous and the men who work there don't want a girl in their way. Ana must find the courage to not only survive but save her family after the worst happens and a mining accident kills her father and leaves her brother missing.

Tara Sullivan is the author of the award-winning and critically acclaimed Golden Boy and The Bitter Side of Sweet. She was born in India and spent her childhood living in Bangladesh, Ecuador, Bolivia, and the Dominican Republic with her parents, who were international aid workers. She received a BA in Spanish literature and cognitive science from the University of Virginia and an MA in Latin American studies and an MPA in nonprofit management from Indiana University. Her first novel, Golden Boy, won the 2014 Notable Social Studies Trade Books for Young People Award and was selected as a top-ten book of 2013 by YALSA and as a best book of the year by Kirkus Reviews and The Wall Street Journal. Her second novel, The Bitter Side of Sweet, won the 2017 Children's Africana Book Award Honor and was an ALSC Notable Children's Book. She currently lives with her family in Massachusetts.

Praise for Treasure of the World:

★ “Rich with memorable characters and streaks of brilliant writing, as in the author’s previous works, Ana’s story takes readers on an arduous and ultimately rewarding journey that illuminates a fraction of the human toll behind the profit-driven pursuits of a materialistic world. Heartbreakingly splendid.” —Kirkus, starred review

“Show[s] the kindness of others and the importance of family strength and resilience. . . [and] just how important learning is in bettering your lot in life.” —School Library Connection

“Sullivan, who addressed child labor in the cocoa industry in The Bitter Side of Sweet, here exposes the tragedy of child miners forced to leave school to help support their families by working in the "mountain that eats men."...Readers are left with...hope…but the dire plight of all these families is abundantly clear.” —Booklist

★ “A tender, harrowing story of family, friendship, and the pursuit of freedom.”—Kirkus Reviews, starred review

★ “In crisp, accessible prose, Sullivan draws readers into a most compelling story of survival under unspeakable hardship, bravery, and teamwork… Absorbing and important.”—Booklist, starred review

★ “An engaging story that will engender empathy in readers.”—School Library Journal, starred review

★ “Curriculum connections abound and even reluctant readers will be drawn to the suspenseful plot and distinctive characters.”—SLC, starred review

★  “A riveting snapshot of one Tanzanian boy who makes himself matter.”—Kirkus Reviews, starred review

★ “Readers will be haunted by Habo’s voice as he seeks a place of dignity and respect in society. An important and affecting story.”—School Library Journal, starred review