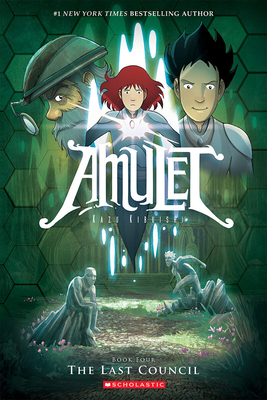 This is book number 4 in the Amulet series.

Emily and her friends think they'll find the help they need in Cielis, but something isn't right. Streets that were once busy are deserted, and the townspeople who are left live in crippling fear. Emily is escorted to the Academy where she's expected to compete for a spot on the Guardian Council, the most powerful Stonekeepers. But as the number of competitors gets smaller and smaller, a terrible secret is slowly uncovered--a secret that, if left buried, means certain destruction of everything Emily fights for.

Kazu Kibuishi is the founder and editor of the critically acclaimed Flight anthologies, as well as the creator of COPPER. He lives in Alhambra, California, with his wife and fellow comics artist, Amy Kim Kibuishi, and their son. Visit him online at www.boltcity.com.

"[The] action-packed adventure sequences move at an exciting clip. . . . Part fantasy . . . and part manga, this volume has much to appeal to readers." --BOOKLIST

"A richly drawn graphic-fantasy series following in the footsteps of BONE and a must for all fantasy fans." --KIRKUS REVIEWS