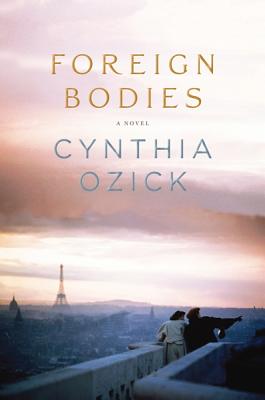 By Cynthia Ozick
This item is not available.
Not Available

“I can't recall reading The Ambassadors in college, but familiarity with that novel is not necessary to enjoy this 'retelling' of the tale in contemporary form. The protagonist, Bea Nightingale, is an intriguing character, and the story is an engaging one, with emotional family entanglements handled brilliantly by a masterful storyteller.”
— Betsey Detwiler, Buttonwood Books & Toys, Cohasset, MA

In her sixth novel, Cynthia Ozick retells the story of Henry James’s The Ambassadors as a photographic negative, retaining the plot but reversing the meaning.

Foreign Bodies transforms Henry James’s prototype into a brilliant, utterly original, new American classic. At the core of the story is Bea Nightingale, a fiftyish divorced schoolteacher whose life has been on hold during the many years since her brief marriage. When her estranged, difficult brother asks her to leave New York for Paris to retrieve a nephew she barely knows, she becomes entangled in the lives of her brother’s family and even, after so long, her ex-husband. Every one of them is irrevocably changed by the events of just a few months in that fateful year. Traveling from New York to Paris to Hollywood, aiding and abetting her nephew and niece while waging a war of letters with her brother, facing her ex-husband and finally shaking off his lingering sneers from decades past, Bea Nightingale is a newly liberated divorcee who inadvertently wreaks havoc on the very people she tries to help.

"Ozick’s heady fiction springs from her deep critical involvement in literature, especially her fascination with Henry James, which emboldened her to lift the plot of his masterpiece, The Ambassadors, and recast it in a taut and flaying novel that is utterly her own….Ozick’s dramatic inquiry into the malignance of betrayal; exile literal and emotional; the many tentacles of anti-Semitism; and the balm and aberrance of artistic obsession is brilliantly nuanced and profoundly disquieting." – Booklist, starred review

*Starred Review* An extraordinary novel, loosely based on The Ambassadors—but Ozick (Dictation, 2008, etc.) manages to out-James the master himself.

Julian Nachtigall, son of a tyrannical and imperious businessman, has gone to Paris but has shown no interest in returning home. While there, he links up with Lili, a Romanian expat about ten years his senior. Marvin, the father, is furious that Julian wants to waste his life playing around in nonserious matters (e.g., writing essays and observations of French life), so he sends his sister Bea (who’s Anglicized her name to Nightingale) to Paris to bring him to his senses as well as bring him home. Bea teaches English to high-school thugs who mock her love of Wordsworth and Keats, and Marvin has always held her in contempt for what in his eyes is her impractical and useless profession. Bea is complicit in tricking Marvin by sending Julian’s sister, Iris, to Paris instead. Iris is the apple of Marvin’s eye, a graduate student in chemistry and a promising scientist—in other words, all that Julian is not. But unbeknownst to Marvin, Iris is also happy to escape the imperatives of her authoritarian and oppressive father, so she goes to Paris more in the belief that she will stay there rather than bring her brother back home to California. Through flashbacks we learn of Bea’s unhappy and brief marriage to Leo Coopersmith, a composer who has pretensions of being the next Mahler, though he winds up something of a Hollywood hack, composing music for cartoons. We also meet Marvin’s long-suffering and brow-beaten wife, Margaret, whose neurasthenia is directly attributable to her husband’s iron-fisted despotism. Ozick brilliantly weaves together the multiple strands of her narrative through letters, flashbacks and Jamesian observations of social behavior. This is superb, dazzling fiction. Ozick richly observes and lovingly crafts each character, and every sentence is a tribute to her masterful command of language.

"Cynthia Ozick is one of America’s greatest living writers... The "leaving" — of parents, of a spouse, of a child, of a family, of a country, of a continent, of all we thought our lives were for — follows every character through this brilliant story of how we mark others without knowing it, revealing how we are all tattooed by other people’s ambitions." - - Dara Horn, The Forward "It is pure pleasure to encounter Cynthia Ozick: a morally brilliant comic master whose plots keep the pages turning and whose every sentence sings. Ozick's latest novel is billed as a 'photographic negative' of Henry James' The Ambassadors, with the same plot and the opposite meaning. Readers put off by James' baroque style have nothing to fear; part of Ozick's inversion of James is the crisp bite of her prose, and the story, ultimately, is fully hers." - Ms. Magazine "...her vision of Europe and its tragic history is profound; and Lili is a creation of stunning depth. It is not Jamesian, it is Ozickian." -- Richard Eder, Boston Globe "Ozick has achieved another success. Henry James -- the master -- would not be displeased." -- Miami Herald

"This is vintage Ozick; she is, perhaps, our most classical contemporary novelist, with a strong sense of literary heritage." -- LA Times

Foreign Bodies, by Cynthia Ozick (Houghton Mifflin Harcourt; $26). Bea Nightingale, a teacher in the Bronx in the nineteen-fifties, is in a rut when her peevish brother entreats her to retrieve his son and daughter from Paris, where they sought refuge from his oppressive ways. Ozick’s taut, sparkling novel is billed as a retelling of Henry James’s "The Ambassadors," and she transforms James’s cultivated Europe into a "scarred and exhausted" landscape teeming with the ghosts of war. Bea is a reluctant ambassador: at first she strives to do her brother’s bidding, but soon the "romantic agony" of Paris awakens feelings she has long kept subdued. Embroiled in a family drama, careful Bea meddles where once she stood idle, and she confronts a vexing paradox: "how hard it is to change one’s life" and "how terrifyingly simple to change the lives of others." -- The New Yorker

"What makes this novel such an absorbing achievement is not so much its slanted replications of the story line of 'The Ambassadors'...but the witty, fierce way in which it goes about upending the whole theme and meaning and stylistic manner of its revered precurser....'Foreign Bodies' is a nimble, entertaining literary homage, but it is also, chillingly, what James would have called 'the real thing.'" - The New York Times Book Review

Four out of four stars: "Who would dare to rewrite Henry James?  Ozick proves up to the task, recasting The Ambassadors with Jewish Americans in post-war Paris—a city of displaced, battered souls.  Asked by her brother to retrieve his errant son Julian from France, divorcée Beatrice acquiesces and becomes entangled in a web of deceptions.  She’s like King Midas in reverse: All she touches turns to ash.  A profound sadness lies just beneath the polished prose of this affecting tale." – S. C. - People Magazine